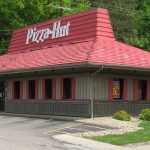 After the Israeli Pizza Hut franchise poked fun at the jailed Palestinian terrorist on Facebook, for eating candy bars in his cell despite initiating a massive hunger strike, Palestinians called for a boycott.
– Israeli company deleted the mocking post, with int’l management issuing an apology.

Palestinians are calling for a boycott of Pizza Hut following a Facebook post by the chain’s Israeli branch that poked fun at terrorist Marwan Barghouti for breaking his hunger strike by secretly sneaking candy bars in his cell.