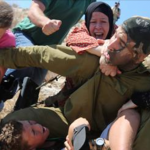 On Friday, an IDF soldier trying to arrest a stone-throwing 13-year-old Palestinian boy drew international outrage after he was documented in a violent clash with Palestinian women and children.  Continue Reading »