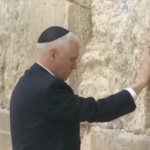 Vice President Mike Pence and his wife Karen, visit Judaism’s Western Wall in Jerusalem wrapping up the Vice President’s first state visit to Israel, before their flight home.
– Watch video of his visit.

The Pences at the Western Wall, Jerusalem 23, Jan 2018 – Screenshot: YouTube

Pence, a long-time backer of the Jewish state, arrived in Israel for his fourth trip on Sunday, which was originally scheduled for mid-December. Continue Reading » 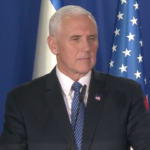 United States Vice President Mike Pence’s visit to Jerusalem was highly anticipated in Israel but shunned by the Palestinians, who refused to meet Pence because of Trump’s decision.
– WATCH Joint Press Conference

“With President [Donald] Trump in the White House, and with your strong leadership here in Israel, the best days of the U.S. and our most cherished ally, Israel, are yet to come,” Pence told Netanyahu.