Criticizing Washington & Europe for their soft stance on Iran, Israel’s defense minister admits ‘Weakness certainly does not pay in the world… I hope the United States will come to its senses.’

Israel cannot depend on the United States to lead any action against Iran’s nuclear program and can only rely on itself, Defense Minister Moshe Ya’alon said Tuesday. 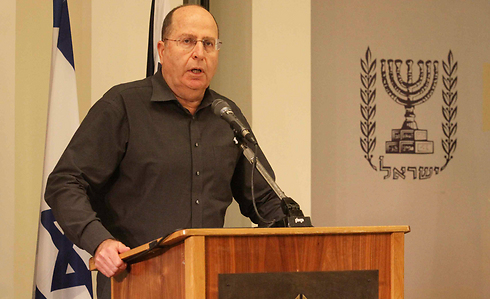 The comments came as world powers and Iran sat down to start a new round of talks over Iran’s contested nuclear program.

The West fears the program could be used to make a nuclear weapon and seeks to scale it back. Continue Reading »

Abbas tells Obama: Palestinians Ready for peace based on ’67 lines

After his White House meeting, Palestinian leader Mahmoud Abbas, said Palestinians recognized Israel’s legitimacy back in 1988 and in 1993.

US President Barack Obama on Monday told Palestinian leader Mahmoud Abbas that both he and Israeli leaders must make tough political decisions and take “risks” for peace.

Meeting Obama at the White House, Abbas said a scheduled Israeli release of a fourth tranche of Palestinian prisoners by March 29 would show how serious Prime Minister Benjamin Netanyahu was about extending peace talks.

Speaking in Washington, MK Ayelet Shaked says Judea & Samaria Arabs will be Jordan citizens, Gaza could become independent or annexed to Egypt. She went on to warn of a nuclear Iran.

MK Ayelet Shaked (Jewish Home/Bayit Yehudi) spoke in Washington Thursday night, warning about a nuclear Iran and proposing that Arabs in Judea and Samaria will be citizens of Jordan, while Gaza will be independent or annexed to Egypt. The Jewish Home MK spoke before American and European politicians at an event hosted by former MK Benny Elon and attended by members of a pro-Israel lobby. Continue Reading »

During his visit to Washington, Ya’alon says peace talks should resume immediately and without preconditions, initiative is another dictation.

Washington – Defense Minister Moshe Ya’alon slammed the Arab League peace initiative in his speech at the Washington Institute in the US, and called it a ‘spin.’

Ya’alon claimed the initiative is a dictation, and said Israel is always willing to return to the negotiation table, barring preconditions and dictations.

Earlier this week Prime Minister Benjamin Netanyahu said the time has come to end the “squabbling over preconditions” and resume negotiations. Continue Reading »

Chief representative of the Palestinian Liberation Organization (PLO) in Washington D.C. is warning United States lawmakers against retaliating for last month’s statehood vote at the United Nations, maintaining that doing so would only hurt U.S. credibility in the region.

“History has shown time and again that the language of threats, financial pressure, and punitive measures simply does not work,” Maen Rashid Areikat wrote in a letter sent to U.S. lawmakers. “Engagement and dialogue is the only way to express the views of Congress. Continue Reading »