Tag Archive for Who is a Jew 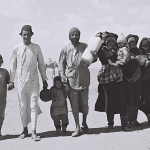 A new ruling in Jewish law permitting a specific genetic test to be used as proof of Jewish descent for certain Ashkenazi Jews is being promoted as a possible solution for potentially hundreds of thousands of Israeli citizens from the former Soviet Union (FSU) having difficulty proving their Jewish status.

The ruling comes from Rabbi Yosef Carmel, who is both co-head of the Eretz Hemdah Institute for Advanced Jewish Studies and a senior rabbinical judge on the private Eretz Hemdah rabbinical court in south Jerusalem. Continue Reading »