ZIM cargo ship not allowed to port in Tunisia 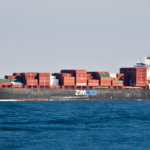 A ship leased by the Israeli ZIM shipping company was forced last week to change route that originally passed through the port of Rades in Tunisia on its way to Spain.

The ship left the entrance to the port of Rades after anti-Israel boycotters threatened to block the harbor and port workers threatened to refuse to handle the cargo if it anchored at the port. Continue Reading »

Returning to Israel from east Asia, an Israeli container ship was attacked by four pirate boats off the coast of Somalia in the Bab-el-Mandeb Strait.

An Israeli security team thwarted an attempt on Wednesday by Somali pirates to seize an Israeli container ship.

The ship, belonging to Zim Integrated Shipping Services, ran into trouble in Bab-el-Mandeb Strait, off the coast of Somalia, as it made its way from east Asia to Israel.

A number of pirate boats approached the ship and pirates from one of the boats attempted to board it.

Last month, BDS protesters obstructed cargo from being unloading off the Zim Piraeus for nearly 5 days before the vessel departed for L.A. port.

Officials say a group of pro-Palestinian protesters are again blocking an Israeli-owned commercial ship from unloading its cargo at a port in California.

A woman marches with a ‘Block the Boat’ sign to the Port of Oakland, August 16, 2014. – Photo: Steve Rhodes/Demotix/Corbis

International Longshore and Warehouse Union spokesman Craig Merrilees says longshore workers did not unload cargo from the Zim Shanghai docked at the Port of Oakland on Saturday morning because of safety concerns raised by the presence of police and protesters.

Anti-Israel Facebook page calls on their supporters to ‘Block the boat for Gaza’ with plans against Zim vessels attempting to dock an US ports.

Pro-Palestinian organizations have announced that they will begin sabotaging the operations of shipping company Zim in the United States. 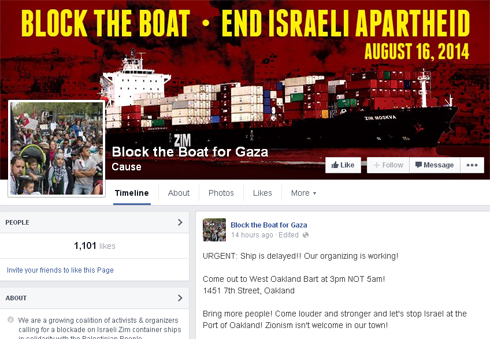 Under a banner of “Block the Boat for Gaza,” the action’s organizers called for people to stop the firm’s vessels from docking at ports and unloading their merchandise.

The protest’s first action – according to the group’s Facebook page – will be an attempt to prevent the docking of a cargo ship in Oakland, California. Continue Reading »