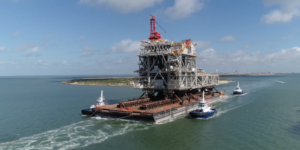 The experimental pumping will continue for three months and will test the infrastructure prior to the flow of the actual commercial supply, according to Jordan’s National Electric Power Company (NEPCO).

Energy Minister Yuval Steinetz discussed the start of the gas flow to Jordan with Ynet news, saying “with this, Israel is becoming for the first time in its history, an energy exporter.” The minister added that gas flow to Egypt would begin within a week to ten days. The planned natural gas exports to Egypt were approved by Steinitz in December.

The Leviathan natural-gas platform successfully finished the final stage of testing on Tuesday.

“This is an historic day for Noble [Energy] and for the State of Israel,” said Bini Zomer, Noble’s vice president for regional affairs. “With the flow of gas from Leviathan, Israel has achieved a level of energy security that, only a few short years ago, would have been unimaginable.”

Gas from the Tamar field has been pumped to Jordan for the past two years, so the new exports from Leviathan are not the first exports to Israel’s eastern neighbor. They will be on a much larger scale, however, since the Leviathan deal with Jordan is worth $10 billion, while the one concerning the Tamar field is worth about $500 million.

On Saturday, two electrical transformers servicing a gas transfer station intended for the transport of gas from Leviathan to Jordan were torched by unidentified arsonists in Jordan’s northern area of Irbid.

According to Sky News Arabia, this was not the first attack against the gas transfer station in Irbid.

Every free man in Jordan must sacrifice himself and his children to blow up a gas line that passes through Jordanian territory; we are all martyrs of the project.

Jordanian citizens and politicians protested the planned transfer of gas between the two nations earlier this week.

On Sunday, Jordan’s parliament filed an urgent memo requesting that a law be drafted to ban the import of gas from Israel, according to Asharq Al-Awsat. Dozens of activists held a protest in front of the parliament, calling for a cancellation of the gas trade deal.

“It’s a black day in the history of Jordan, and a crime against the nation and a national catastrophe that makes our sovereignty hostage to, and puts the energy sector into the hands of the Zionist occupation,” said the mainstream Islamic Action Front, the country’s main political opposition.

NEPCO signed a 15-year agreement with Noble Energy to purchase $10 billion worth of natural gas in September 2016. Jordan’s Constitutional Court ruled that the deal doesn’t need to be approved by the parliament.

In March, the Jordanian House of Representatives declared its “utter rejection” of the deal and requested that it be “canceled at any cost.”

In July, Jordanian MP Tariq Khoury called on Jordanians to “sign a code of honor to blow up the gas pipeline from Israel to the land of Jordan,” according to the Palestinian Quds news agency.

“Every free man in Jordan must sacrifice himself and his children to blow up a gas line that passes through Jordanian territory; we are all martyrs of the project,” said Khoury in a speech during a press conference held by MP Saleh al-Armouti, set up to reveal details about the gas agreement and discuss “misinformation” by the Jordanian government about the deal.

Prime Minister Benjamin Netanyahu took off for Greece on Thursday to sign a deal that will allow for the construction of a undersea pipeline to send Israeli gas from the Eastern Mediterranean to Europe through the EastMed gas pipe. The deal will be signed in Athens at a summit between Netanyahu, Greek Prime Minister Kyriakos Mitsotakis and Cypriot President Nicos Anastasiades.