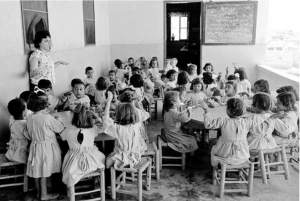 The US government decision to suspend funds to UNRWA schools until reforms take place in UNRWA has raised some eyebrows.

Why did the US suspend funds to UNRWA in the first place?

Since 1999, Hamas has been chosen in successive internal UNRWA elections in Gaza to lead the workers union and teachers union of UNRWA, as mentors who influence generations of Palestinian refugee descendants to launch a violent Jihad for the ‘right of return’ to Arab villages lost during the 1948 war.

In that context, the first comprehensive study of UNRWA school books, completed in July 2017, reflects the terrorist domination of UNRWA schools. This study found UNRWA texts to be characterized by de-legitimization of Israel, rejection of the Jews’ very presence in the country, demonization of Israel and the Jewish people, while promoting the violent liberation of all of Palestine – including Israel’s pre-1967 territories – instead of adhering to UN values of peace and co-existence.

Official logos to six different UNRWA financed schools that include the UN logos along with map of conquered Israel replaced by Palestine. – Photos: ElderOfZiyon.blogspot.

Moreover, UNRWA schools encourage children to engage in acts of war by way of presenting war against Israel as an inevitable necessity, including the violent return of the descendants of Arab refugees to a liberated pre-67 Palestine, through veneration of Jihad, martyrdom and Palestinian individuals who participate in the armed rebellion (called Fidais – those who sacrifice themselves, or martyrs and prisoners-of-war when killed or imprisoned). A decisive element in the UNRWA indoctrination is the inclusion of the official anthems of both the Palestinian Authority and its dominant body – the Fatah organization – which are taught to students of the lower grades:

With my determination, my fire and the volcano of my revenge

And my blood’s yearning to my land and my home

I climbed the mountains and waged the struggle

I overcame the impossible and shattered the fetters

With the winds’ storm and the weapon’s fire

And with my people’s insistence on waging the struggle

Palestine is my home and the road to my victory

Palestine is my revenge and the land of steadfastness

By the dint of the oath under the flag’s shadow

By my land, my people and the pain’s fire:

And I shall die as a fidai until I return

UNRWA school books present terrorists killed in action as role models to be emulated: Dalal al-Mughrabi, who led the terror attack in 1978 on an Israeli civilian bus on the Coastal Highway, in which thirty five civilians – men, women and children – were murdered, is referred to twice.

In Arabic Language, Grade 5, Part 1 (2017) p. 14 she is mentioned among the martyrs of Islamic and Arab history of the country.

Another UNRWA school book mentions: “Dalal al-Mughrabi who led the Fidai ‘Deir Yassin’ operation on the Palestinian coast in 1978 in which more than thirty soldiers were killed” (Social Studies, Grade 9, Part 1 (2017) p. 74).

The violent struggle in which the Palestinian children are encouraged to participate includes the perceived “Right of Return” to villages lost during the 1948 war.

And of the hurricanes that hurl black destruction

I have an appointment in my homeland; it is impossible that I forget that appointment.

Another poem, adding incitement to exterminate “the foreigners” to the violent struggle:

I swear! I shall sacrifice my blood to water the noble ones’ land

O country of Al-Aqsa [Mosque] and the sacred place [Haram]; O cradle of pride and nobility

Patience, patience, for victory is ours and dawn peeps out from darkness.

A Molotov cocktail attack on an Israeli civilian bus is described in an UNRWA school book as a “barbecue party.” The piece reads: “The neighbor: ‘The curfew does not include us in [the neighborhood of] Al-Sharafah. It is imposed on the Al-Natarish [neighborhood]. It seems that there is a barbecue party there with Molotov cocktails on one of the buses of the Psagot settlement…’”

Conclusion: Renewed aid to UNRWA schools could be conditioned upon the disbarring of terrorists as teachers in UN schools and on removal of such curriculum which perpetuates a war to liberate Palestine, all of Palestine, under the cry of  “the right of return by force of arms.”

David Michael Bedein is director of Israel Resource News Agency and heads the Center for Near East Policy Research, author of Genesis of the Palestinian Authority and Roadblock to Peace: How the UN Perpetuates the Arab-Israeli Conflict: UNRWA Policies Reconsidered.

More from the author ►