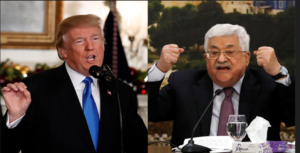 When Rosh Hashanah ended on Tuesday evening, Jews discovered that over the holiday, the Trump administration had enacted two policies – one foreign and one domestic – that on their face, don’t appear to be connected. But actually, they stem from the same rationale. And both together and separately, these two policies give Jews much to be thankful for.

First, the administration announced it is closing the Palestine Liberation Organization’s office in Washington, DC.

National security adviser John Bolton talks about the International Criminal Court, the PLO and the US supporting Israel.

US National Security Advisor John Bolton explained Monday that the administration decided to close the PLO office due to the PLO’s refusal to carry out substantive negotiations towards the achievement of a peace agreement with Israel. Then too, by working to prosecute Israeli nationals at the International Criminal Court, the PLO is violating the conditions Congress set as law for the continued operation of its Washington office.

The State Department’s definition of antisemitism is based on the definition drafted by the International Holocaust Remembrance Alliance. The IHRA’s working definition of antisemitism explicitly states that anti-Israel activities which among other things reject Israel’s right to exist and the Jewish people’s right to self-determination; compare contemporary policies of the State of Israel to policies of Nazi Germany; and apply a standard for judging Israel’s policies and actions that is not applied to other nations and states, are all acts of antisemitism. As such, they are prohibited under the civil rights statutes that protect Americans against discrimination based on their group identity.

The common phenomenon both policies address can be referred to as “the Palestinian exception.”

For instance, the Palestinian exception has afforded the PLO and its Palestinian Authority the right to enjoy US political and financial support even as they undercut the US interest of achieving peace between the Palestinians and Israel. The Palestinians have been given a pass for rejecting Israeli peace proposals. They have been given a pass for waging an unrelenting war against Israel by cultivating, encouraging and carrying out terrorist attacks against Israel; prosecuting a political war against Israel whose goal is to delegitimize its right to exist; and disseminating and cultivating hatred of Israel and the Jewish people.

Since the dawn of the peace process, every secretary of state has at one point or another said that the PLO and PA must stop abetting terrorism and supporting terrorism.

Likewise, every secretary of state has at some point paid lip service to the notion that the PLO and the Palestinian Authority must cease indoctrinating Palestinians to hate Jews and seek Israel’s destruction.

But until President Donald Trump took office, no administration took substantive action against the PA or the PLO for their destructive, racist behavior. On the contrary, until Trump’s inauguration, three successive administrations responded to aggressive behavior by the Palestinians by expanding US financial and political support for the PLO, the PA and UNRWA. The Obama administration upgraded the diplomatic status of the PLO’s office in Washington.

As for the Palestinians’ supporters in the US, successive administrations have failed to call them to task for their ever-escalating efforts to discriminate against Israel’s supporters on campuses. This repeated failure has empowered hate groups like Students for Justice in Palestine, the Muslim Students Association, Jewish Voice for Peace and hundreds of aligned groups on college campuses to escalate their anti-Jewish activities.

Trump explained the basic rationale of his decision to defund UNRWA and slash funding to the PA and other Palestinian institutions in a conference call with Jewish leaders last week ahead of Rosh Hashanah. This rationale also holds for Trump’s decision to close the PLO’s Washington office, which Bolton announced four days after the call.

Trump said that he discussed conditioning US aid to the Palestinians on Palestinian actions on behalf of peace in conversations with former US peace negotiators.

“I said to some of the past negotiators, ‘Did you ever do that before? Did you ever use the money angle?’

“They said, ‘No, sir. We thought it would be disrespectful.’

In other words, Trump’s policy is not to extend exceptional treatment to the Palestinians. Just as he expects allied states that the US supports to support the US, so he expects the Palestinians to act in conformance with the US interest of forging peace between them and Israel.

In this vein, it is important to note that US financial support for the Palestinians, like the US decision to allow the PLO to operate a representative office in Washington, were both initiated in 1994 on the basis of the PLO’s formal commitment to work toward peace with Israel. Over the years, as Palestinian bad faith toward Israel became inarguable, Congress passed laws conditioning continued US assistance of the Palestinians on their behavior.

Yet the three previous administrations opted to ignore the law and operate instead in conformance with the Palestinian exception that gives the PA and the PLO a pass for everything – including breaking American laws.

As for the Palestinians’ supporters on US campuses, the Palestinian exception enabled them to wage a war against American Jews on campuses the likes of which the US has arguably never seen.

Over the years, as antisemitic assaults on Jewish students expanded under the headline of pro-Palestinian activism, Jewish students and groups repeatedly sought redress and corrective action from university authorities. In the many cases where those authorities refused to intervene to protect Jewish students, the students and Jewish advocacy groups turned to the Department of Education’s Office of Civil Rights (OCR) for protection, but to little or no avail.

In one notable instance, in 2011 the Zionist Organization of America filed a complaint against Rutgers University for failing to protect the civil rights of Jewish students, and the Department of Education rejected their complaint by arguing that it couldn’t prove the assault in question was antisemitic.

That year, a student group named BAKA, (Belief Awareness Kindness Action) organized a campus event that was to be “free and open to the public.” It was titled, “Never Again for Anyone.”

The title of the event made clear that its intent was to compare Israel to Nazi Germany. That is, it was on its face designed to be an antisemitic event.

As the ZOA noted in a statement this week, “When the event organizers saw how many ‘Zionists’ (aka Jews) showed up at the event, they… selectively enforced an admission fee against students who were, or were perceived to be Jewish. Jewish students reported this outrageous and painful and hurtful antisemitic discrimination to the University, which failed to address it.”

Despite the strong evidence that BAKA held an antisemitic event and then deliberately targeted Jewish students for discriminatory treatment, the OCR closed the case claiming that it lacked evidence of discrimination. The ZOA’s appeal languished unaddressed for nearly four years.

The Obama administration’s decision to turn a blind eye to anti-Jewish discrimination undertaken in the name of the Palestinians was part of a general policy of applying the Palestinian exception to pro-Palestinian activists.

This policy was made official in 2013. As Politico reported on Tuesday, in response to pressure from Kenneth Marcus, who then served as head of the Louis Brandeis Center for Human Rights and other civil rights groups, the Obama Education Department’s OCR outlined what it believed constituted actionable discrimination against Jewish students.

The OCR drew a distinction between antisemitism and political views about Israel. It released a statement stipulating that distinction.

In other words, in the Obama administration’s view, while it is illegal to say that Jews are murderers and carrying out genocide, it is permissible to hold an event accusing Israel of carrying out genocide against the Palestinians and then discriminating against Jewish students who try to defend Israel from slander.

Needless to say, this position enabled antisemitic assaults against Jewish students to massively expand in recent years. “Israeli Apartheid Weeks” and BDS drives spread throughout the country – even though the basic conflation of Israel with apartheid South Africa and attempts to boycott Israel are both defined as forms of antisemitism under the IHRA definition adopted by the State Department.

Now serving as head of OCR as the Assistant Secretary of Education for Civil Rights, Marcus is ending the Palestinian exception in the US education system. Marcus announced that the OCR will use the State Department’s definition of antisemitism when considering allegations of antisemitic acts on campuses in a letter to the ZOA.

The actual purpose of Marcus’s letter was to inform the organization that the OCR is considering the ZOA’s four-year-old appeal of the OCR’s decision not to take action against Rutgers for its refusal to protect Jewish students from discrimination.

Trump’s opponents insist that ending the Palestinian exception in relation to the PLO diminishes the already miniscule hope of reaching an accord between Israel and the PLO. Former peace negotiator Aaron David Miller excoriated the Trump administration’s policy in a column in USA Today on Wednesday.

Anti-Israel and far left groups like Students for Justice in Palestine and the American Civil Liberties Union argue that Marcus’s policy harms the free speech rights of pro-Palestinian groups.

These criticisms are disingenuous.

The only way that peace will ever be achieved is if the Palestinians stop their efforts to destroy Israel and embrace the cause of peace – either with the PLO or without it.

Discrimination and bigotry are not free speech issues. Allowing pro-Palestinian groups to intimidate Jewish students into silence is not about guaranteeing free speech, it is about blocking free speech and trampling the civil rights of Jews.

The Palestinian exception has made peace less likely and it has made antisemitism the only form of bigotry permitted – indeed supported – by US universities today.

The Trump administration should be thanked, not attacked, for finally discarding it.

Caroline B. Glick is the senior fellow for Middle Eastern Affairs at the Center for Security Policy in Washington, DC and travels several times a year to Washington where she routinely briefs senior administration officials and members of Congress on issues of joint Israeli-American concern.

Not just a columnist, in March 2002, Caroline Glick accepted the position of deputy managing editor of The Jerusalem Post, the source of this, and many of her other revealing articles.