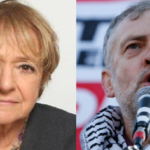 Hodge, a former British minister, confronted Corbyn in the House of Representatives after a vote on Brexit. Continue Reading »