The Ever Evolving Israel Navy 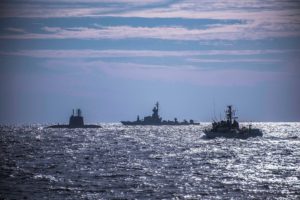 Some 30 meters underground in the Kirya military headquarters in Tel Aviv sits the Navy War Room, whence senior officers can see every wave crashing on the nation’s shores and every ship and plane in or over its territorial waters.

The Israel Navy is small compared to other IDF corps, and it has a large territory to protect since the expansion of the country’s Mediterranean exclusive economic zone (EEZ) from 40 miles to 150 miles four years ago, a senior naval officer said on Tuesday.

An Israeli warship with helicopter on deck, near an Israeli naval base off Israel’s Red Sea resort city of Eilat – Israel Navy/IDF Spokesperson’s Unit

“The expansion of the EEZ has changed the face of the navy,” the officer said before showing The Jerusalem Post the Naval War Room.

The expansion is also a “significant challenge” when the navy must use everything at its disposal to gather intelligence and keep the nation’s waters safe from any threat, including working with the air and ground forces, he added.

The navy is also tasked with securing the natural gas drilling rigs that are in Israel’s EEZ, clear targets for enemies to the north. The IDF believes that Hezbollah in Lebanon has long-range missiles that can hit the rigs, which fuel much of the electricity used in Israel.

Hezbollah is a “clear and major enemy” that continues to grow in terms of battlefield experience and its arsenal of advanced weaponry coming from Iran, senior naval officers told the Post.

Due to the threat posed by Hezbollah’s arsenal of Grad rockets and other, longer-range, projectiles, the navy is reported to have changed the design of the Sa’ar-6 corvette warships that are currently being manufactured for Israel in Germany to have two Iron Dome short-range defensive missile launchers instead of one.

Israel is economically dependent on the sea and has recently began to upgrade its entire combat fleet with Sa’ar-6 corvettes and Dolphin 2-class submarines, the largest submarines to have been built in Germany since World War II. The existing Sa’ar-5 and Sa’ar-4.5 ships are being upgraded with the integration of new radars and electronic warfare systems. In November, the navy received three new Super Dvora Mk III-class patrol boats.

While the threat posed by Hezbollah remains the main focus of the navy and of the IDF in general, that posed by Islamic State to the south is just as real.

With shared interests in fighting Islamic State, Israel has in the past carried out drills in order to maintain force preparedness, and continues to have good cooperation with the Egyptians.

“The Egyptians are doing a really good job in fighting Daesh [ISIS]. They understand the importance of Sinai and how it can have an impact not only on tourism but also on the Gaza Strip,” a senior officer with knowledge of international cooperation in the navy told the Post.

“The threat posed by waterborne attacks from Sinai is a major threat,” he continued, stressing that while “it is different from rockets striking one of our ships, they won’t stop trying and we must keep it in our mind that they are capable. The group is under pressure in [its capital in the Syrian city of] Raqqa and they will need to release that pressure somewhere.”

In the Naval War Room, the senior officer told the Post that the navy has in recent years understood that sea-based terrorist attacks can also come from under the water.

During Operation Protective Edge in 2014, five Hamas frogmen (naval commandos) tried to infiltrate Kibbutz Zikim before they were engaged and killed by the IDF. In the three years since the war, Hamas has significantly expanded its naval commando unit with a reported 1,500 frogmen.

“The navy is 100% concerned about underwater threats, both on the northern border with Lebanon and from Gaza,” he said, explaining that this was not the case three or four years ago. “The state-of-mind of the navy has changed. In the past we didn’t think that an underwater threat existed, but now we do and we are fully prepared.”

In 2015, the navy began deploying dozens of sensors from a new system named Aqua Shield that can detect and report suspicious underwater movement. The sensors were placed on the sea floor near the Gaza Strip and Lebanon’s water borders with Israel.

The navy has also placed greater emphasis on training for underwater infiltrations and in the beginning of August its Salvage and Underwater Missions Unit held a wide-ranging, two-week drill in Haifa dubbed “Noble Melinda” with counterparts from the US and France.

It was the first time that the French were invited to take part in the annual exercise, which for the past two decades only saw Israel and the US take part. According the senior officer with knowledge of international cooperation in the navy, the French have increasingly docked in Israeli ports and for the past two years have even surpassed the Americans in visiting Israel.

“We share intelligence, knowledge and drill with the French,” the senior officer told the Post, adding that the navy is “very happy” with the increase of French visits.

But it’s not only the French who are sharing experience and knowledge with the Israel Navy.

According to senior naval officers, the civil war in Syria and other regional challenges such as Islamic State, and the ongoing discoveries of offshore energy are making the eastern Mediterranean more interesting to Israel’s allies.

Several dozen ships from countries such as France, the United States, India, Great Britain and Italy have docked in Israeli naval ports over the past year, carrying out drills with the Israel Navy and coming ashore for cultural excursions.

But there are of course strong navies that officials do not foresee any increased cooperation with.

With fighting raging in Syria, the Russian Navy has increased its presence in the area over the past few years. Israeli officials have stated that while the navy does not plan to expand any sort of cooperation with the Russian Navy, there is clear communication between the two, for safety reasons.

Another regional power, Turkey, and Israel normalized ties last year after a six-year rupture that began when Ankara broke off relations with Jerusalem following a raid by Israel Navy commandos on the Mavi Marmara protest ship trying to break the blockade of the Hamas-run Gaza Strip. Ten pro-Palestinian Turks were killed after they attacked the commandos. The two countries used to participate in annual joint navy and air force drills, but following the downgrading of ties Jerusalem turned instead to Greece and the Greek Cypriots instead for exercises of air, sea and ground forces.

“The Greeks are a major and natural strategic partner,” the senior international cooperation officer said, adding that “someone had to fill the empty spot when we stopped doing drills with the Turks.”

Though the IDF may also want to work with the Turkish Navy, officials don’t see that happening.