The IDF’s “Na’mer” is ready for battle

By YAAKOV LAPPIN
In the middle of the Negev Desert, a group of Namer (“Leopard”) armored personnel carriers are parked in formation, waiting for the order to open fire. Scattered among them are Merkava Mark 2 tanks. 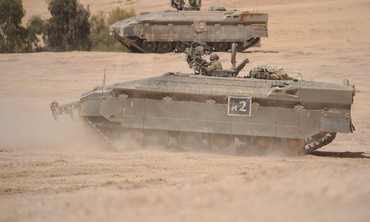 A NAMER APC take part in a live-fire exercise in the Negev. – Photo: IDF Spokesman’s Office

The Namer’s operators run through their last checks. Their commanders, situated on a mound overlooking the area, radio their instructions. The desert wind blows through the expansive training ground, marked by sandy hills and valleys.

In any future conflict with Hezbollah in Lebanon or Hamas in Gaza – or possibly in Syria – the imposing Namer APC, which is the size of tanks (and is built using the frame of the Merkava tank) will carry Golani Brigade infantry soldiers deep into enemy territory.

The APCs, together with tanks, will blaze a trail for the remainder of the IDF ground forces, and will have to engage an array of threats such as tunnels laden with explosives and terrorists armed with anti-tank missiles.

The rate of progress made by the Namer APCs and the soldiers they carry will help determine how quickly the IDF extinguishes hostile rocket fire on the Israeli home front during the next confrontation with Hezbollah.

Hence, training the APC’s operators is crucial to the future of battlefield victory.

The Namer APCs and tanks have gathered for a live-fire exercise at the IDF’s School for Infantry Corps Professions and Squad Commanders. This is the training center through which all Namer crews must pass, to learn how to master their 63.5-ton metal beasts.

Suddenly, the desert air is shattered by a series of deafening volleys. A cacophony of automatic shots from an M2 Browning machine gun affixed to the Namer blast the eardrums of anyone in the vicinity.

The Namer’s bullets sear through the ground in a far-off valley, sending sand flying up into the air.

The Namer is also fitted with secondary firepower capabilities in the form of grenade launchers and MAG 7.62 mm. machine guns. All of these weapons are controlled remotely via two joysticks and a screen in the vehicle.

The APCs and tanks rush up mounds, open fire on an imaginary target, and then quickly reverse their way down the slope, out of the sight of a would-be enemy. The Namer guns are joined by the heavy, unmistakable sound of tanks firing their shells. The vehicles are “returning fire” according to the drill scenario.

“Two missiles fired at you!” one of the drill commanders calls over the radio network to a Namer driver.

The attacks represent the first phase of conquering territory in a ground combat scenario.

In any real battle, it is reasonable to expect that this kind of firepower would be backed by artillery and aerial strikes.

Since it entered service in 2008, the Namer is becoming Israel’s principal land platform for transporting infantry soldiers across combat zones. It is expected to replace older – and weaker – APC models such as the Achzarit and the Nakpadon.

It is the fastest, most fortified APC in the IDF with considerable firepower capabilities, and can transport infantry soldiers over a long distance.

Sgt. Yarden Fried, 20, an infantry instructor for the Namer, and Lt. Inbar Margaliot, 22, a Namer section officer, are responsible for training Golani crews in handling the vehicles.

A heavy burden rests on the shoulders of these two young women who must make sure that infantry forces can navigate their way through a war zone.

The two stand on a mound overseeing the company drill.

“The aim here is to conquer the targets,” says Fried. “The Golani Brigade will be the first to go into battle,” she adds.

“There is cooperation with tanks, because the two will always be combined,” Margaliot says.

Fried points out the many fortifications built into the Namer, with armored reinforcements to its front, back, and sides, enabling it to withstand direct rocket and explosive attacks from all directions.

As the vehicles maneuver below, Margaliot says she feels much pride in seeing her training bear fruit.

“All of the fighters are trained by us. In addition to pride, I also feel concern. They are like our kids,” she says.

Fried says she has family in the United States, and that they are amazed when she tells them that instead of enjoying college, she is training infantry soldiers for war.

“My cousin is at university studying history of art. She can’t believe a 20-year-old can be qualified to do this,” she says. “Girls want to contribute to the military. Even after long nights of hard work, when we only get to bed at 3 a.m., it feels good to contribute.

“We see the respect we get from the soldiers,” she says.

The firing from the vehicles stops. Soldiers disembark from the Namer, advance to a hilltop, and lay on the ground, their rifles pointed forward. The tanks, meanwhile, race forward to the next position.

Soon, the soldiers get up and move into the area that has just absorbed the bullets and shells. One area has been “conquered” in the drill. The forces move forward to take the next area.

In a real war, the decision on when soldiers should disembark the Namer and storm enemy positions on foot rests with their company commander, and is influenced by the changing conditions of any given situation.

He arrives in a jeep to monitor the progress of the drill.

He tells The Jerusalem Post that the Namer offers some highly advanced systems as well as conditions for the soldiers inside, including air conditioning.

“The infantry soldier likes to move around on foot. But inside the Namer, the soldiers can feel comfortable.

There is room for all the soldiers and their equipment. The Namer will move on with the solder’s gear inside after he disembarks,” Marelly explains.

“This is a company exercise to train Namer officers. They have to learn to command the vehicle, and we’re the only ones who provide this training. We train the drivers and the company commanders.

After the training, the Namer crew gets an army license allowing them to operate the vehicle,” he says.

“We’re not only a school. We produce a company that can fight with this new platform, alongside tanks,” Marelly stresses.

The infantry school’s instructors receive and pass on the IDF’s most updated ground forces doctrine, based on threat assessments from all arenas.

“If a specific enemy emerges with a new threat, it will have to be studied.

We must ensure that the training remains relevant,” he says.

Although the battle doctrine is handed down to the school’s instructors from the Ground Forces command, it is also improved upon by feedback from the infantry school. The feedback leads to changes – including some to the interior design of the Namer.

Marelly says that the number of hours spent training infantry forces together with the Armored Corps rose dramatically since the Second Lebanon War of 2006, when chronic under-training led to a series of battlefield errors.

“We’ve been training a lot in recent years. There are no drills involving just one type of army corps. They’re all combined. In other drills, the air forces and artillery are involved too. Any battle will see combined forces in action,” he says.