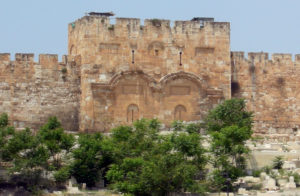 In the summer of 2004, history was made on a small scale in the Supreme Court in Jerusalem when the High Court of Justice ruled in favor of a petition filed by a Jewish group to protect the Temple Mount antiquities. In one of the last cases Justice Jacob Turkel handled before retiring, the judge adopted the petition filed by the Committee for the Prevention of Destruction of Antiquities on the Temple Mount, forcing the government to take action that went against what was almost natural for it in those days – simply giving in to the Jerusalem Islamic Waqf, the body that oversees what takes place on the Mount.

At the request of the committee, which included personalities such as the late Justice Meir Shamgar, writer A.B. Yehoshua, and former Jerusalem Mayor Teddy Kollek, Turkel prevented the government and the Israel Antiquities Authority from removing some 3,000 tons of dirt and rubble rich in archaeological findings – which the waqf had wanted to truck off the site – from the Mount. Three senior archaeologists, Ephraim Stern, Ami Mazar, and Roni Reich, convinced Turkel that “the mounds of dirt must not taken outside the walls of the Temple Mount [compound] before they have been sifted under the supervision of a professional archaeologist, in situ” – meaning, on the Temple Mount itself, and that “the very [act of] loading and dumping it again could completely destroy some of the findings and cause irreparable damage to others.”

That landmark ruling, which astonished legal circles at the time, was influenced by the fact that the public still keenly remembered what former director of the IAA Amir Drori had a few years earlier called the biggest “archaeological crime” of all time. Or as then-Attorney General Elyakim Rubenstein put it: “the historic kick to the Jewish people.”

After massive covert digging, in December 1996 a new mosque was officially inaugurated by the Palestinians as El-Marwani Mosque. The Solomon’s Stables no longer exist as such, in attempts of destroying the Jewish history of the Mount. – Photo: Yaakov Shoham, Wikimedia

It happened at the end of the 1990s, when the Islamic Movement in Israel started renovations to turn Solomon’s Stables, located underground at the southeastern corner of the Temple Mount, into a mosque. The project entailed digging an enormous pit so stairs could be constructed leading down to the structure’s northern row of arches, two of which eventually became the main entrance to Al-Marwani mosque, which was built on the site of Solomon’s Stables. The construction was carried out without any archaeological oversight or documentation by the IAA, and using heavy construction equipment. A fleet of 400 trucks removed the excavated dirt in the dead of night and unloaded it in Kidron Valley east of Jerusalem’s Old City of Jerusalem and at a garbage dump in al-Eizariya.

This archaeological trauma was still fresh in the minds of the petitioners and, apparently, Turkel, when he handed down his 2004 ruling. And it lies at the core of a new scandal that erupted a week ago and threatens to light up the Temple Mount yet again.

The Golden Gate from within the Mount of the old city wall of Jerusalem. – Photo: Yaakov Shoham, Wikimedia

During this year’s holy month of Ramadan, hundreds of Muslims were actively digging on the Temple Mount. They brought up the piles of rubble from the excavation of Solomon’s Stables 20 years ago, which the High Court ruled could not be removed from the Temple Mount, and started to pick through it, removing stones to use to build terraces. According to reports, they might even have tried to transport some of the rubble off the Temple Mount. Only the alertness of the members of the Committee for the Prevention of Destruction of Antiquities and archaeologist Zachi Dvira stopped the waqf in its tracks.

Dvira and fellow archaeologist Israel Prize laureate Dr. Gabriel Barkay understand better than most the immense importance of these piles of dirt. From 2004 to 2017, they and thousands of volunteers sifted through the rubble that the waqf removed from the Mount in 1999. This painstaking work turned up about half a million tiny finds from the First and Second Temple eras, as well as later periods: tens of thousands of pottery fragments, thousands of ancient coins, jewelry in many styles made from a range of materials, and a rich assortment of beads, arrowheads, ballista stones, pendants, amulets, and seals.

One of the standout discoveries was a piece of flooring of the Opus Stakila type, which allowed researchers to recreate the floor of the Temple Mount in the time of King Herod. About 20% of the finds date back to the time of the First Temple and include a clay impression bearing a mark from the royal seal of King Hezekiah.

Some 3,000 tons of rubble and dirt remain on the Mount, but the waqf and Jordan have thus far banned any archaeological work in the holy compound, a decision accepted by the Israeli government and its police force. It would be a boon for the science of archaeology if archaeologists had access to the mounds of rubble. Sifting and researching at the site where material was excavated is nothing like sifting through it at a distant location.

From time to time, the Muslims have tried to attack the mounds. The most recent one was a larger-scale attempt, but it failed. Barkay says that 97% of the material was unharmed.

“The real damage is in the act itself, the waqf’s attempt to carry out a hijacking and prove that it’s in charge there, while in everything having to do with antiquities and archaeology, the Israel Antiquities Authority should be in charge,” Barkay says.

Turning down the heat

When all is said and done, it’s really the police who are in charge on the Temple Mount. Police personnel are the ones who decide whether and when to call in the IAA. By definition, oversight of the Temple Mount is not free. Shuka Dorfman, who headed the IAA for 14 years until he died in 2014, admitted in his book “Under the Surface” that the IAA’s hands were largely tied when it came to enforcing the Antiquities Law on the Temple Mount, and that it was the government that had tied them. An attorney general who examined the Israeli authorities’ handling of the Temple Mount and the supervision of the antiquities of the site directed harsh criticism at the government, which for some reason still has not been cleared for publication.

A newly constructed observation point on top of the Golden Gate allows Israeli authorities to keep an eye on mounds of archaeological rubble that the High Court has ruled must remain on the Temple Mount – Photo: Wilson44691, Wikimedia

This time, at any rate, the police responded quickly. It set up a lookout on top of the Golden Gate from which it can observe the mounds of rubble. The waqf rushed to its Jordanian patron and demanded that the observation post be removed, claiming that it violated the status quo. Prime Minister Benjamin Netanyahu raised the matter in his recent meeting with King Abdullah of Jordan. The fate of the new observation point is unclear. For now, it’s still in place, but currents are running high in the Muslim “authorities,” and the Mount itself is not quiet. The Muslims see even this lookout as a threat to the status quo.

This past week saw a resumption of harassment of Jews visiting the Mount. Arrests were made. Having learned its lesson from last summer and the metal detectors crisis, the Israel Police isn’t being at all dismissive of what appears to be a minor fuss. Meanwhile, behind the scenes, Israel is in contact with Jordan and the waqf to ensure that what is happening on the Mount doesn’t cause another explosion.