The Palestinian’s Queen of delusion, master fabulist and cozenage extraordinaire 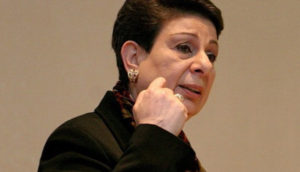 PLO executive committee member Hanan Ashrawi is a proliferator that Jesus was Palestinian, that Israel is the “ancestral” land of the Palestinians – not the Jewish People, and that the 800,000 Jews who were exiled from Muslim countries after Israel beat the Arab armies in 1948, all ‘left their ancestral homes voluntarily.’

According to PLO Executive Committee member Hanan Ashrawi, Israel holds the Palestinian people captive, denying its historical rights and the imperative to get real about peace. Her weekly diatribe happened to coincide with Jordanian King Abdullah’s first visit to Ramallah in five years, which demonstrated that the rest of the Arab world could not care less about history.

The telegenic Ashrawi is often trotted out for a public display of the kinder, gentler Palestinian nationalist, but in fact she is a protégé of the late Columbia University scholar and anti-Zionist Edward Said. As the holder of a PhD in medieval and comparative literature from the University of Virginia, she might be expected to be a voice of cultural enlightenment, if not reasonableness.

Google lists more than a few sites of “famous Ashrawi quotes” that illustrate her consistent misrepresentation of fact in aid of the establishment of a Palestinian state. She began her deluded efforts with a breathtaking statement about the some 800,000 Jews who fled persecution from Muslim countries for refuge in the new State of Israel.

In Ashrawi’s historical analysis, these Jews were only “emigrants,” who had left their ancestral homes voluntarily.

Jews lived happily among their Muslim neighbors and were brought to Israel to usurp “ancestral” Palestinian lands as part of a plot by “Zionists.”

This has been the underlying strategy of the Palestinian Authority led by Mahmoud Abbas, of which Ashrawi has been an integral part: to eliminate any historical grounds for Jewish self-determination and nationhood. Ashrawi has echoed Abbas’s traditional Christmas message: “We celebrate the birth of Jesus, a Palestinian messenger of love, justice and peace, which has guided millions from the moment that his message came out from a small grotto in Bethlehem over 2,000 years ago.”

PA autocrat Mahmoud Abbas attends a Christmas Midnight Mass at the Church of the Nativity in the West Bank town of Bethlehem December 25, 2015. – Photo: REUTERS – Considering the over 50% reduction to the Christian population in Bethlehem and Gaza since the formation of the Palestinian Authority, isn’t this like Hitler going to a Bar-Mitzvah?

“Jesus as the first Palestinian martyr” is a recurrent theme of standard Palestinian delusions about history and a regular feature of the distorted PA narrative. Its inspiration may have been Yasser Arafat’s assertion to then-US president Bill Clinton that there was never a Jewish Temple in Jerusalem, but its current invocation by UNESCO persists in the egregious denial that no Jewish connection to Jerusalem ever existed.

Abbas has pursued this calumny before the UN General Assembly, disingenuously asserting Christian and Muslim links to the land while pointedly omitting any reference to Jewish history that predates Christianity and Islam by thousands of years – despite the biblical record that both invoke, not to mention numerous archeological findings.

The PA’s numbing reiteration of fake history has become conventional wisdom, due not only to the success of Palestinian propaganda but also to the failure of our government’s efforts at so-called public diplomacy. This situation relies on the world’s ignorance of history, from the Balfour Declaration of 1917 to the partition resolution of the UN General Assembly of November 1947.

The latter saw the first rejection of Palestinian statehood by the Muslim world, which resulted in the first attempt to destroy the Jewish state, in Israel’s War of Independence.

Some 70 years later, Ashrawi declares that US President Donald Trump’s adviser Jared Kushner has “disqualified himself” from Middle East peace efforts because he allegedly has adopted Israel’s positions in the dispute. She correctly accused him last week of bias, but it was bias toward the historical truth that Ashrawi distorts in order to perpetuate the crisis and ensure it remains unresolved.

“His talk was really problematic. It betrays not just deep bias but a lack of knowledge of the history itself and therefore of the needs and requirements for a solution,” Ashrawi said, adding, “Israel is the occupying power, enslaving another people, acting outside the law, and you cannot say there is no solution. If so, why even try?” The PA’s ongoing incitement received a back-handed endorsement from no less than King Abdullah, who visited Ramallah for the first time in five years, ostensibly to boost Abbas in his power struggle against Hamas.

What the king’s rare visit to the PA actually conveyed was the truth that the only Muslim country that cares about the Palestinian question is Jordan. With an 80% Palestinian population, Jordan, the king showed, must coddle the Palestinians to ensure its own survival.