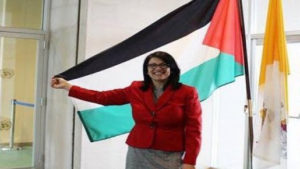 Her failure to mention Jews drew strong criticism from political commentators and pro-Israel activists in the United States, including sarcastic replies and outrage from social media users.

This #HolocaustRemembranceDay—and every day—we pay tribute to the millions of lives lost and forever changed in one of the most horrific chapters of our world’s history. May we honor them by fighting to ensure hate and bigotry #neveragain prevail. #YomHaShoah pic.twitter.com/q1gAwfINEe

This #HolocaustRemembranceDay—and every day—we pay tribute to the millions of lives lost and forever changed in one of the most horrific chapters of our world’s history,” Tlaib wrote. “May we honor them by fighting to ensure hate and bigotry #neveragain prevail. #YomHaShoah.”

Elder of Ziyon, an American pro-Israel blog that covers anti-Zionist activities in the United States and elsewhere, posted a past tweet by anti-Israel activist and Tlaib associate Linda Sarsour which criticized former Republican White House Chief of Staff Reince Priebus for his 2017 Holocaust Remembrance Day statement that failed to mention Jews.

“According to Linda Sarsour @lsarsour, @RepRashida @RashidaTlaib is an antisemite,” Elder of Ziyon noted.

Anila Ali, president of the American Muslim Multifaith Women’s Empowerment Council, also criticized Tlaib for the statement, saying “it’s hard for you to say ‘Jews’ ‘Jewish lives’? This is such a forced tweet. Save it.”

She added that “we all know how antisemitic you and your buddies at CAIR are,” in reference to the Council on American-Islamic Relations (CAIR) advocacy organization, a Muslim civil rights and advocacy group that has been accused of ties to Islamist organization and terrorist groups such as Hamas.

@RashidaTlaib It’s hard for you to say,”Jews” “Jewish lives”? This is such a forced, tweet. Save it. We all know how antiSemitic you and your buddies at Cair are. https://t.co/BwQcMPpWOU

Tlaib has a long history of criticism for comments and activities on Israeli and Jewish topics. In August 2019, Israel announced that Tlaib and her colleague Ilhan Omar, another strong Israel critic accused of past antisemitism, would be denied entry into the country.

Louis Farrakhan supporter and Sharia law advocate Linda Sarsour (2nd from left) stands with Rep. Rashida Tlaib (3rd from left) holding a map where they have replaced the State of Israel with Palestine.

This came following the passing of US House Resolution 326 spearheaded by Democratic House members as a response to the Trump administration’s “Deal of the Century,” which expressed support for a two-state solution and warned Israel against attempting to annex territory in the West Bank.