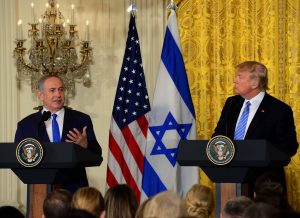 “These comments, if true, were not authorized by the White House. They do not reflect the U.S. position, and certainly not the President’s position,” a White House spokesman told Haaretz.

Earlier, Channel 2 News reported that diplomats stationed at the U.S. consulate in Jerusalem refused to hold talks with Israeli officials about arrangements for President Donald Trump’s planned visit to the Western Wall during his trip to Israel next week.

The diplomats reportedly claimed that the site is located in the “West Bank”, and is disputed territory, and therefore the Israeli government has no authority over it.

The report quoted Israeli sources in charge of Trump’s visit as saying that “this is Trump’s show, all the rest are extras, including Prime Minister Netanyahu … The statement that the Western Wall is territory in the West Bank was received with astonishment … Israel is convinced that this statement is contrary to President Trump’s policy, as it was expressed in his behavior and his fierce opposition to the last Security Council resolution.”

Channel 2 also stated that Israel had asked for direct clarification from the American administration on this issue.

Leaders of the Conference of Presidents of Major American Jewish Organizations welcomed the prompt statement by the Trump Administration disavowing the comments about the Western Wall.

Stephen M. Greenberg, Chairman and Malcolm Hoenlein, Executive Vice Chairman/CEO of the Conference of Presidents said in a statement, “We were dismayed by press accounts earlier today reporting that, in response to a request that Prime Minister Netanyahu to accompany President Trump when he visits the Western Wall in the Old City of Jerusalem, unidentified U.S. officials said the Kotel was not in Israel and is ‘part of the West Bank.’”

“We welcome the prompt statement by the Trump Administration that ‘The comments about the Western Wall were not authorized communication and they do not represent the position of the United States and certainly not of the president,” they added.

Greenberg and Hoenlein noted that the incident “underscores the terrible damage caused by serial UN resolutions, including UN Security Council Resolution 2334, denying the more than three thousand years of the Jewish connection to Israel and the holiest sites in the Jewish religion, which the Trump Administration has said it will work to reverse.”