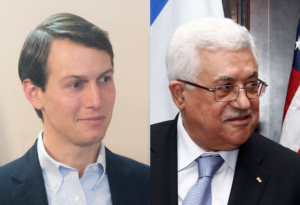 Israel’s reasons for distrusting the Palestinian Authority are clear. And numerous statements by Arab leaders across the Middle East in recent years reveal that they don’t think very highly of Mahmoud Abbas and his regime, even if they remain committed to the “Palestinian cause.”

But the bulk of the PA’s annual income comes from the West, and a large chunk of that used to be provided by the United States. But no more.

Over the past several weeks, US President Donald Trump has significantly slashed American financial aid to the Palestinians. In an interview with the New York Times published on Friday, Trump’s son-in-law and foreign policy adviser Jared Kushner effectively warned the Palestinians to stop biting the hands that feed them.

“Nobody is entitled to America’s foreign aid,” Kushner said as he addressed the Palestinian leadership’s hostility toward the Trump Administration.

Kushner also explained this White House’s unprecedented steps vis-a-vis the Israeli-Palestinian conflict, such as recognizing Israel’s claim to Jerusalem and demanding that the Palestinian refugees be subject to the same set of rules as every other refugee population on earth.

“There were too many false realities that were created — that people worship — that I think needed to be changed,” said Kushner. “All we’re doing is dealing with things as we see them and not being scared out of doing the right thing. I think, as a result, you have a much higher chance of actually achieving a real peace.”

Dedication ceremony of the Embassy of the United States in Jerusalem, May 2018 – Photo courtesy, U.S. Embassy Jerusalem

The remarks echoed what Israeli leaders have been saying for years – that the Palestinians’ hard-line positions and the international community’s tacit acceptance of them had created an impassible roadblock to peace.