A newly released book by Vicky Ward details the ‘Deal of the Century’ including an oil pipeline from Saudi Arabia to Gaza with newly constructed refineries, a shipping terminal and desalination plants where the Palestinians could find ample employment and enriched lives.

White House senior adviser Jared Kushner’s Middle East peace plan at one point included Jordan giving land to the Palestinian territories and in return getting land from Saudi Arabia, according to a new book on the Kushner family.

REPORT: For the first time, US President Trump’s senior adviser will reportedly provide an update on the long awaited Israel-PA peace plan during the upcoming Warsaw Middle East conference next week.

A White House official said Kushner will be participating in a discussion hosted by former Norwegian foreign minister Borge Brende on efforts to end the Israeli-Palestinian Arab conflict. Continue Reading »

Israel’s reasons for distrusting the Palestinian Authority are clear. And numerous statements by Arab leaders across the Middle East in recent years reveal that they don’t think very highly of Mahmoud Abbas and his regime, even if they remain committed to the “Palestinian cause.” Continue Reading »

– Spokesman for Palestinian Authority autocrat Mahmoud Abbas said the U.S. decision was a “flagrant assault” against the Palestinian people, and a “defiance of UN resolutions.”
– Hamas Spokesman,”US leadership has become an enemy of our people and of our nation.”

WASHINGTON — The Trump administration has cut all funding to the United Nations Relief and Works Agency (UNRWA), questioning the organization’s “fundamental business model” of servicing an “endlessly and exponentially expanding community” of declared Palestinian refugees.

The move was previewed by US media outlets in recent weeks after e-mails from President Donald Trump’s son-in-law, Jared Kushner, were leaked showing his interest in “disrupting” the UN body. Continue Reading »

Senior advisor to US President Trump, Jared Kushner reportedly plans to eliminate UNRWA and resettle the Palestinian descendants of the refugees to neighboring countries, writing, ‘It is important to have an honest and sincere effort to disrupt UNRWA. It perpetuates a status quo, is corrupt, inefficient and doesn’t help peace.’

Jared Kushner, senior advisor and son-in-law of US President Donald Trump, has reportedly been looking into the possibility of stripping the Palestinians in the West Bank and Gaza Strip of their refugee status, consequently removing the issue of a Palestinian right of return from the negotiations table, according to a report in Foreign Policy on Friday. Continue Reading »

With Abbas’ entrenchment, US to focus on Gaza without PA involvement

The U.S. is focusing their efforts to improve the humanitarian conditions in Gaza with a major infusion to the strip’s crippled infrastructure, but without the involvement of PA’s autocrat Abbas, since the peace plan has remained stalled due to the entrenchment of the Palestinian leadership.

With the United States’ highly-anticipated Mideast peace plan stalled amid an ongoing diplomatic freeze-out by the Palestinians, the Trump administration is shifting its focus towards efforts to improve humanitarian conditions in the impoverished Gaza Strip, The Washington Post reported Saturday.

A senior US official told The Post that Washington is considering a major infusion of development aid into the blockaded Palestinian enclave, demonstrating a commitment to Palestinian well-being that would make it more difficult for Palestinian Authority President Mahmoud Abbas to continue to snub peace talks. Continue Reading »

Kushner in Israel ‘ready to work’ with Palestinians, doubts Abbas ‘desire’ for peace 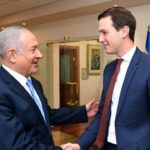 Speaking to an Arabic Palestinian daily, President Donald Trump’s son-in-law & senior Mid-East advisor announced his team’s readiness to begin the much-anticipated peace process for Israel and the Palestinians, even if Mahmoud Abbas refuses to return to the negotiations table, lamenting the PA autocrat’s reluctance to change his position these past 25 years.

Jared Kushner, US President Donald Trump’s senior adviser, said that he is “ready to work with President Abbas,” a Palestinian newspaper reported on Sunday, but said he had little reason to believe the Palestinian leader has the “ability, or desire,” to reach a peace accord with Israel. Continue Reading »

But the Palestinian Authority, angered by the Trump administration’s policies on Jerusalem, boycotted the meeting. Continue Reading »

Trump’s peace envoy Jason Greenblatt, along with his senior adviser Jared Kushner, will convene an international “brainstorming” session designed to deal with the tiny, overpopulated coastal enclave that’s suffering from gross fiscal mismanagement, misappropriation of humanitarian aid, and unbridled embezzlement, all by Hamas, the ruling government.

Palestinian in Gaza forced to remain in squalor as Hamas redirects funds for food, health, and reconstruction to tunnel-construction and wages to Hamas militants.

According to the Arab media report, the PA autocrat’s secretary referred Kushner to a PLO representative in Washington, a childish & sarcastic move to highlight the US Sec of State’s notice that the PLO’s mission in Washington may be closed as a point of law, since the Palestinians breached a signed agreement, precipitating its closure.

According to the report, Abbas’s secretary referred Kushner to a Palestine Liberation Organization (PLO) representative in Washington. Continue Reading »

Trump’s mid-East “peace team” seeks to facilitate an equitable deal, without dictating terms as the previous administration, for a lasting congruous arrangement to improve the lives of Israelis and Palestinians, using tools serendipitously made available from the changing political winds.

WASHINGTON – US President Donald Trump’s point men on the Israeli-Palestinian conflict have diligently listened to its key players for 10 months, studying the region’s storied past, working to earn the trust of both sides and leveraging the serendipitous alignment of interests that has recently formed between the Jewish state and its Arab neighbors.

Their listening tour continues, but the president’s son-in-law and senior adviser, Jared Kushner, as well as his special representative for international negotiations, Jason Greenblatt, have in their short time in diplomatic service formed some ideas of their own. Continue Reading » 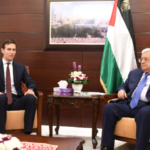 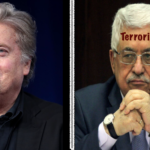 Steve Bannon reportedly texted a friend on May 3 about ditching upcoming meeting with Mahmoud Abbas, “I’m not going to breathe the same air as that terrorist.”

“I’m not going to breathe the same air as that terrorist,” Steve Bannon reportedly texted a friend on May 3, when the Palestinian Authority President was in town to meet his newly minted US counterpart. Continue Reading »