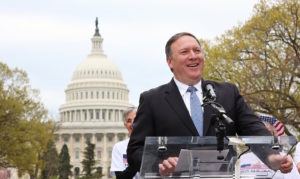 Pompeo said the US is “disavowing the deeply flawed” the Carter-era memorandum, written by then-State Department Legal Adviser Herbert Hansell, which called all Israeli settlements beyond the 1949 armistice lines to be illegal.

This goes a step further than Pompeo’s statement in November that the US “no longer recognize Israeli settlements as per se inconsistent with international law.”

“It’s important to speak the truth that the facts lead us to, and that is what we have done,” Pompeo said in his video message. “We are recognizing that settlements do not inherently violate international law.”

As such, he added, the US is returning to a more “balanced” policy, “advancing the cause of peace between Israelis and Palestinians.”

Professor Eugene Kontorovich of the Kohelet Forum said: “For decades, the obscure Carter-era memo was used as justification for anti-Israel policies…Secretary Pompeo’s statement makes clear the US’s wholesale rejection of the legal theory that holds that international law restricts Israeli Jews from moving into areas from which Jordan had ethnically cleansed them in 1949.”