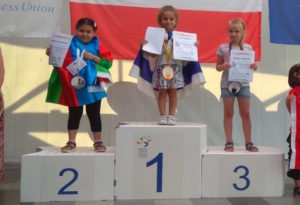 The country, which has no diplomatic ties with Israel, does not permit Israelis to enter its borders, and is refusing to make an exception for Liel Levitan, the European School Individual Chess champion in her age group, for the upcoming World Chess Federation (FIDE) tournament.

This is 7-year-old chess champ Liel Levitan. She has won the European chess♟️ champioship for kids last week but she can’t compete in the world chess championship that will be held in Tunisia. Why? She’s Israeli.

The Arab countries’ racism towards Israel in sports must stop. pic.twitter.com/c5Bm7TXsKr

The restriction would force Levitan and other Israelis to forfeit their spots in the tournament. A similar situation at the 2017 tournament, also held in Tunisia, disqualified Israelis from participating in the competition – simply because they could not enter the country.

In an email last week, FIDE secretary Polina Tsedenova said the organization is taking necessary measures to put pressure on Tunisia to allow entry of all participants.

“We have requested an urgent explanation from the Tunisian Chess Federation,” Tsedenova wrote. “We are also sending them a separate letter requesting written confirmation that the 2019 World Schools Championship, which is scheduled to take place in Tunisia, will provide visas to all participants. Only after that will the organization of the tournament be confirmed for them.”

The email was sent in response to an inquiry by the Israel advocacy organization StandWithUs.

According to FIDE’s code of ethics, there is an assumption that every person involved in the game “attaches the greatest importance to fair play and good sportsmanship.”

In response to the ban, StandWithUs started a petition urging FIDE to let Levitan and other Israelis participate and to abide by its rules of fairness and equality.

“This is unprecedented and represents a breakthrough in the accountability of international sports organizations regarding the mistreatment of Israeli athletes in world sporting events,” said StandWithUs spokesperson Gilad Kabilo.