The Turkish daily Hurriyet reports suggestion to resume meetings between ministers from Israel and 6 Arab Mediterranean countries was blocked by Ankara & Cairo, who said ‘it’s not the right time’.

An initiative to bring Israel and six Arab countries’ ministers together under NATO’s Mediterranean Dialogue group for the first time since 2008 has been nixed by Turkey and Egypt, Turkish daily Hurriyet reported Saturday.

Ankara and Cairo reportedly said “it was not the right time” for such a meeting.

“The general-secretary was planning to invite the foreign ministers of the Mediterranean Dialogue countries on the sidelines of the NATO foreign ministers meeting scheduled for April 23 but Turkey objected to the idea,” a Western diplomat told Hürriyet.

However, Ankara rejected the claim. “It’s not right that we have objected. This sort of meeting was not held since 2008 because of the political problems between Israel and Arab countries. At this stage, such a meeting would not be useful,” a Turkish official told Hurriyet.

He further noted that Egypt and Tunisia, two members of the Mediterranean Dialogue, did not want to hold such meeting at this stage either.

Established in 2004, the Mediterranean Dialogue brings Israel, Egypt, Morocco, Tunisia, Mauritania, Algeria and Jordan together with the purpose of contributing to regional security and stability.

However, the last time the group met at the foreign ministerial level was 2008 – a reflection of the ongoing dispute between Israel and the Arab world. 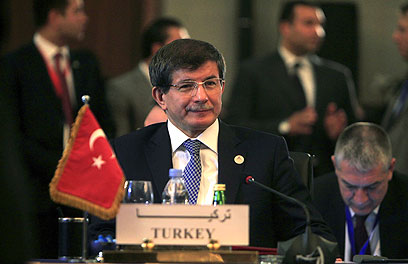 The Turkish official dismissed claims that Ankara objected to the idea because of Israel’s presence in the group, recalling that the government started to allow Israeli participation in NATO’s political meetings in December 2012.

Turkey had vetoed Israeli participation in NATO’s Chicago Summit in May 2012, as well as an Israeli demand to have a permanent office at NATO.

Hurriyet estimated that even if Ankara did not object to the idea due to Israel’s participation, nixing the meeting is mostly to the disadvantage of Israel, which is the most eager member of the dialogue group.