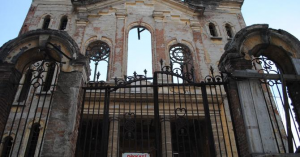 The event prompted tight security, with surrounding roads being closed and searches of guests. The synagogue also has a metal detector installed at the entrance.

When the temple reopened in 2015 after a five-year, $2.5 million restoration, no new synagogue had opened in Turkey in two generations.

Gürkan told the couple that “history was being written,”Hurriyet Daily News said.

“We are experiencing the honor and joy of taking part in the first [Jewish] wedding after 41 years. I would wish for you to stay in Edirne, but it’s impossible to fix. However, please come to Edirne more often. We are expecting you,” he said.