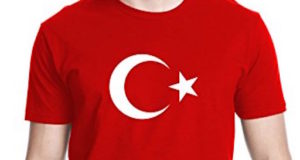 Turkish and Palestinian flags on the slopes of the Temple Mount – Photo: AP

Some of the tourists wore shirts emblazoned with the Turkish flag, the witnesses said, while others wore traditional Ottoman headdresses.

Anadolu further said eye witnesses maintained the cops told the Turks they would have to remove their shirts if they wanted to enter the complex, and when the tourists refused a scuffle broke out.

A diplomat from the Turkish consulate in Jerusalem arrived to the police station where the group was detained, the state-run agency said.

The Turkish party’s arrest may further sour relations between Israel and Turkey. Despite a reconciliation agreement between the two countries in the wake of events surrounding the Marmara flotilla to Gaza, and despite the decision to completely normalize relations, Turkish President Recep Tayyip Erdoğan has continually and scathingly attacked Israel over the past year.

Since President Donald Trump’s declaration recognizing Jerusalem as Israel’s capital, Erdoğan has tried to position himself as the leader of the bloc opposing the declaration, and has voiced harsh anti-Israeli sentiments over the past two weeks.

The Turkish president said Israel was a “child-killing terror state” and promised not to “abandon” Jerusalem to Jewish hands. On the American threat to halt assistance funds to countries voting against the decision to recognize Jerusalem as capital in the United Nations, Erdoğan replied, “Trump, you can’t buy us with your dollars.”