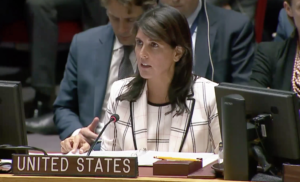 The Security Council met at the behest of the United States to discuss Tuesday’s Gaza mortar and rocket attacks on south Israel, which left 3 soldiers wounded, prompting an IDF military response.

Speaking after the United Nations Special Coordinator for the Middle East Peace Process, Nickolay Mladenov, Ambassador Haley said that a unanimous condemnation by the council would have been in order, but was not forthcoming because the attacks were launched on Israel.

“You might think that the rest of the Security Council would join us in condemning a terrorist organization like Hamas. There shouldn’t be any debate about this. But of course, because this attack involves Israel, the standard is different,” she said in her opening remarks.

The United States, she said, drafted a Security Council statement that would have condemned Hamas for launching rockets and endangering civilians.

“This should have been a no brainer. You would think no one would want to side with Hamas when it comes to condemning rocket launches but the statement was blocked,” Haley added.

She also bemoaned that fact that a meeting under the agenda items entitled “Threats to international peace and security caused by terrorist acts” was blocked.

“Apparently some Security Council members did not think that Hamas launching rockets qualifies as terrorism. The United States begs to differ,” she said.

“Who among us would accept 70 rockets launched into your country? We all know the answer to that. No one would,” she continued.