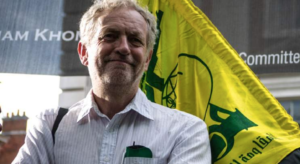 Opposed to the government’s decision to designate all of Hezbollah as a terrorist organization, UK Labour leader Jeremy Corbyn, whose party has been drenched with accusations of anti-Semitism since he assumed leadership in 2015, had referred to Hezbollah in the past as his “friends.”

The British Labour party rejected the government’s decision to define Hezbollah as a terrorist organization in its totality.

“Decisions on the proscription of organizations as terror groups are supposed to be made on the advice of civil servants based on clear evidence that those organizations fall foul of the proscription criteria set out in legislation,” Labour said in a statement Tuesday, adding, “The Home Secretary must therefore now demonstrate that this decision was taken in an objective and impartial way, and driven by clear and new evidence, not by his leadership ambitions.”

Jeremy Corbyn seen here leading a pro-Gaza/Hamas demonstration in the summer of 2014 also later attended a ceremony at the grave of a terrorist behind the Munich Olympics massacre.- Photo: Social Media screenshot

In addition, Labour leader Jeremy Corbyn gave party members permission to skip a parliamentary vote on the policy proscribing the entire organization as opposed to just its armed wing as was Britain’s previous policy.

Corbyn, whose Labour party has been dogged by accusations of anti-Semitism since he assumed leadership of the party in 2015, had previously referred to Hezbollah as his “friends.”

Yesterday, Home Secretary Sajid Javid said that Hezbollah’s operations between the political and military wings were so intertwined, the UK could no longer differentiate between the two.

“Hezballah is continuing in its attempts to destabilize the fragile situation in the Middle East – and we are no longer able to distinguish between their already banned military wing and the political party. Because of this, I have taken the decision to proscribe the group in its entirety,” Javid said.