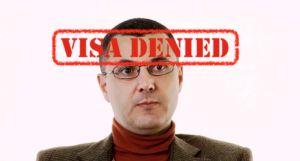 Barghouti had been due to speak at a Palestine Solidarity Campaign event in Brighton on Sunday, alongside prominent Labour party politicians including Diane Abbott, the Shadow Home Secretary and Lisa Nandy, chair of Labour Friends of Palestine and the Middle East, the Jewish Chronicle reported Friday.

However, the Palestine Solidarity Campaign (PSC) announced that Barghouti had been unable to travel to the UK “because his visa was abnormally delayed by the British government without explanation.”

The PSC blamed his lack of a visa on “growing efforts by Israel and its allies to suppress Palestinian voices and the movements for Palestinian rights.”

The organization added that Barghouti would speak via a video link-up instead.

The Qatari-born Barghouti is a resident of the Israeli city of Acre, and was granted a permanent residency permit due to his marriage to an Israeli Arab. There have been calls on the Israeli government to revoke his residency due to his connection to BDS.

Barghouti was recently refused entry into the United States because of his role as founder and chairman of the BDS movement.

Despite advocating for a worldwide economic, cultural and academic boycott of Israel, Barghouti received a Masters degree from Tel Aviv University and is currently studying for a PhD there.

Luke Akehurst, Labour member and director of the “We Believe in Israel” group, said the organization “welcomed” the decision to deny him entry to the UK.

“This man believes a Jewish state should not exist, he believes Israel should not exist. These views are a violation of the IHRA definition of anti-Semitism and they should have no place at Labour party conference. Instead they would have been welcomed – Lisa Nandy and Diane Abbott were planning to speak alongside him. They should apologize and explain themselves,” he said, according to the Jewish Chronicle.