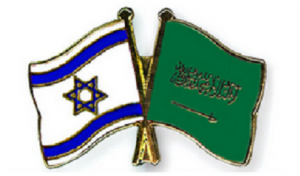 In an article from a UK daily, a former top Netanyahu adviser is reported as saying Saudi Arabia’s Crown Prince Mohammed bin Salman is willing to side-step the tedious, unproductive Palestinian agenda, in order to seal a deal with Israel against a serious regional threat, Iran.

A bombshell report suggests that Saudi Arabia will buck its commonly held belief that relations between Israel and the Palestinian Authority (PA) are key towards establishing relations with Israel and are ready to sign a deal with the Jewish state, even if the PA opposes it.

Prime Minister Netanyahu’s former national security advisor Yaakov Nagel told the Telegraph that Saudi Arabia is so desperate to ink an agreement with Israel that it is prepared to move forward despite lack of a Palestinian state. Saudi Arabia’s traditional position forbids negotiations with Israel until a two-state solution is implemented.

Channel 10 reported last month that Saudi Arabia told PA President Mahmoud Abbas to either accept an Israeli-Palestinian peace deal currently being advanced by the Trump administration or be forced from his position. Abbas hotly denied the remarks and a close confidant told the Times of Israel that “The Channel 10 report is fabricated, false and untrue.”

Israel has long been rumored to be holding covert ties with Saudi Arabia and Israeli Ambassador to the United Nations Danny Danon said last week that Israel enjoys warm relations with many Arab countries despite the fact that these countries officially refuse to recognize Israel’s existence.

“They still do not vote with us, but I can say that we have a relationship with them,” Danon told Ynet. “We are talking about a dozen Islamic countries, including the Arab countries that understand the potential of relations with Israel. The State of Israel is not the regional problem, it is the regional solution, so we are strengthening this cooperation.”