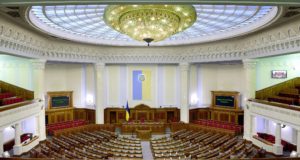 Some 86 – out of 450 – members of the Ukrainian parliament (The Verkhovna Rada) already submitted the bill for a vote, according to reports in the country’s media on Friday.

The post-Soviet state recently held a general elections, which saw a Jewish comedian – who for years played a president on a popular TV show – Volodymyr Zelenskiy, triumph over the former President Petro Poroshenko.

This is not the first time Ukrainian parliamentarians have been toying with the idea of moving the country’s embassy to Jerusalem and similar proposals have been submitted in the past, during Poroshenko’s tenure.

The political analysts in the country estimate the draft resolution was submitted in light of the upcoming parliamentary elections on July 21, and is meant to show solidarity with the Trump administration that moved its embassy from Tel Avivback in May 2018.

The issue of the embassy transfer has also been raised by Minister Ze’ev Elkin (Likud), who has recently met with Zelenskiy following his elections victory. The analysts, however, believe despite the parliamentary pressure moving the embassy is not currently on the Ukrainian president’s agenda.