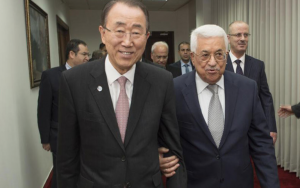 UN Sec. Gen. Ban Ki-moon rejects PM Netanyahu’s claim that Abbas is seeking ‘ethnic cleansing,’ saying that it is in fact the settlements that are the major obstacle to peace.

Netanyahu’s words to mean that anyone who opposes expanding the settlements supports the ethnic cleansing of Israelis, Ban stated that his response to Abbas was “unacceptable and outrageous,”.

Speaking before the Security Council, Ban said, “Let me be absolutely clear: settlements are illegal under international law. The occupation, stifling and oppressive, must end.” Ban also said that the settlements are the key obstacle for peace.

Israeli Ambassador to the UN Benjamin Netanyahu responded to Ban’s statement, saying that it presented a twisted view of the situation in Israel. He added that the true obstacle to peace “begins and ends” with Abu Mazen refusing to meet with Netanyahu. He also suggested that Ban start admonishing Hamas for building underground tunnels and developing a terrorist infrastructure, instead of continuously criticizing Israel.