UN envoy: Palestinian terrorists should not be extolled as ‘Heroes’ 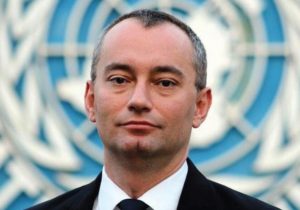 UN official Nickolay Mladenov says he is appalled how Palestinian groups praised the terrorists’ attack as ‘heroic’ and that the reaction should instead have been explicit condemnation of such violence.

“My thoughts and prayers are with the families of the victims, and I wish a speedy recovery to the injured,” Mladenov said in an official statement released on Saturday afternoon.

“I condemn yesterday’s shooting and stabbing attack by Palestinian assailants in the vicinity of the Old City of Jerusalem,” he continued.

The UN envoy also expressed his disdain over the fact that terrorist organizations in the region have hailed the terror act as ‘heroic’ and sang the praises of the three terrorists. “Such terrorist acts must be clearly condemned by all,” he stressed.

“I am appalled that once again some find it appropriate to justify such attacks as ‘heroic.’ They are unacceptable and seek to drag everyone into a new cycle of violence,” he added.

Immediately following the attack, Islamic State took responsibility for it in an unprecedented move, warning Israel that the assault “will not be the last.”

However, Hamas, the terror organization ruling in the Gaza Strip, as well as the People’s Front for the Liberation of Palestine, also claimed that they were behind the attack.

All three attackers were glorified and honored in multiple social media channels overnight.

Mladenov himself took to Twitter to reiterate his condemnation of the attack. “I condemn yesterday’s #terror attack in #Jerusalem,” the UN envoy wrote. “Despicable that Hamas glorifies the perpetrators,” he added.

Mladenov was referring to a Facebook statement released by Hamas spokesman Hazim Qassim mere hours after the assault happened. “The sacrificial operation in Jerusalem is another indication that our Palestinian people is continuing its revolution in the face of the usurping occupier,” he wrote before going on to commend the ‘bravery’ of the three terrorists.

“The occupation’s crime in killing the three young men in occupied Jerusalem confirms once again that the occupation’s real face is of terrorism and extremism in contrast to a people exercising its right of self defense and defense of its holy sites,” he said, suggesting the the three men were victims of Israeli aggression and not terrorists who attempted to kill Israelis.

In one scene, two assailants opened fire at policemen in the Old City and attempted to stab them before being shot to death.

In the other scene, a third terrorist stabbed border policewoman Hadas Malka. While emergency medical teams and a hospital staff both fought for her life, the young policewoman succumbed to her wounds and was pronounced dead on Friday evening. Her burial ceremony is expected to take place later on Saturday.