Robert Piper, a United Nations assistant secretary general and the head of humanitarian affairs for the Palestinian territories, briefed EU officials in Brussels on that, noting there have been over 540 demolitions and confiscations so far this year.

“We have entered a new and fairly disturbing phase in terms of the confrontation between international humanitarian law and the Israeli occupation of the West Bank,” Piper told Reuters. 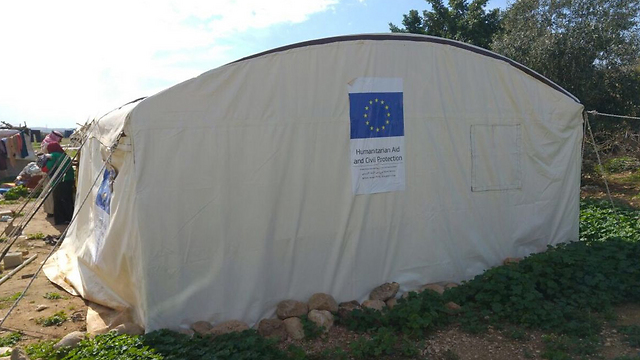 An illegally built EU structure that was demolished.

The IDF, which captured the West Bank in the 1967 Six-Day War, says it carries out the demolitions because the structures are illegal: they were either built without a permit, in a closed military area or firing zone, or violate other planning and zoning restrictions.

“The pace of demolitions has exceeded any previous records and we are only in the fourth month of the year. We are very worried about what the rest of the year holds,” Piper said.

Piper said around 140 aid projects by donors were destroyed, including more than 200,000 euros worth of EU investments, while some 600 people had lost their homes and about 2,000 their livelihoods.

In doing so, he said, Israel was forcing Palestinians away from some parts of the West Bank as more Israeli settlements appeared there, even though building them on the disputed land was against the law.

“The EU needs to reflect on its strategy and how it’s going to respond … This can’t be left unaddressed. It’s a provocation,” Piper said.

Piper challenged the IDF’s justification for the demolitions, saying Israel did not give the Palestinians living there a real chance to obtain building permits.

Piper said that, while there was much diplomacy going on behind closed doors, there was a need for more public statements on the matter, adding that the EU could also deploy diplomats to the sites affected to send a political message to Israel.

“We also need to talk about forms of seeking financial compensation or restitution by the occupying power,” he said.

The 28-nation EU approved in March its first aid package for the Palestinian Authority in 2016, earmarking 252.5 million euros ($287.62 million) to help Palestinian refugees and develop health and education services, among others.