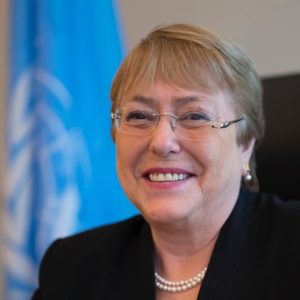 Bachelet noted that it is almost a year since the Hamas-led protests on the Gaza border, known as the March of Return, have begun.

“The end of this month will mark one year since the start of demonstrations which – as the Council’s Commission of Inquiry reported – have been met with deadly, disproportionate force by the Israeli Security Forces, leading to a very high toll of killings and injuries,” Bachelet said.

Bachelet made her statements about Israel in a speech on global inequity that she delivered to the UN Human Rights Council in Geneva, which is holding its 40th session this month.

Bachelet addressed human rights issues in some 20 countries, including those stemming from the Israeli-Palestinian conflict. She spent more time talking about Israel than almost any other country and barely mentioned Iran.

Neither @UNHumanRights or @mbachelet have time for your ‘petty complaints’
The UN is ONLY after the world’s worst violators of world peace!
Besides with only 24hrs a day & annual UN budget of $5.5 billion

Her speech came  less than a week after the UNHRC’s Commission of Inquiry on the Gaza border protests declared that it had determined that the protests were largely peaceful, with one investigator accusing the IDF of deliberately shooting children.

Israel asserts that the demonstrations are violent riots in which Palestinians are attacking military and civilian targets as they attempt to infiltrate into Israel through the Gaza border.

Prime Minister Benjamin Netanyahu rejected the report stating: “The council is setting new records for hypocrisy and mendacity out of an obsessive hatred of Israel, the only democracy in the Middle East. It is Hamas which fires missiles at Israeli citizens, throws explosive devices and carries out terrorist activity during the violent demonstrations along the fence.”

Bachelet responded on Wednesday: “I was disappointed to see the immediate dismissal of that report by Israel without addressing any of the very serious issues raised. All parties concerned should exercise restraint as March 30 (the anniversary of the beginning of the March of Return protests) approaches.”

Regarding Israel’s restriction on the flow of goods into Gaza, Bachelet said that it has “led to negative economic growth; environmental degradation; over 50% unemployment, even higher for youth; and the reliance of more than 70% of people on humanitarian assistance, primarily food. It could be said that the major product of Gaza’s economy is despair.”

Bachelet, who views the West Bank as occupied territory, said that Israeli settlements there “affect all aspects of Palestinians’ daily lives, including significant negative impact on freedom of movement and access to work, education and healthcare. Imposing economic hardship on Palestinians does not make Israelis safer.”

She also said she regretted Israel’s decision not to end the mission of the Temporary International Presence in Hebron. Bachelet said the mission had “helped to prevent and mitigate some human rights violations in a frequently challenging context. It will be essential to ensure continued humanitarian access and protection.”

Her speech also highlighted the Trump administration’s treatment of migrants at the United States-Mexican border and its policy of separating children from their parents.

“In the United States of America, the new Migrant Protection Protocols which restrict access to asylum and other forms of human rights protection – and push migrants back across the border to wait for their proceedings without due process or safeguards – are a source of concern,” she wrote. “A recent report by the Inspector-General for the United States Department of Health and Human Services indicates that thousands more migrant children have been separated from their families than had been previously reported.”

Israel and Stuff ‘Call to Action‘

👉 Sign the Petition Against Anti-Israel Bias at the UN