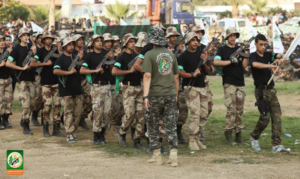 The report detailed the various terrorist organizations which recruit children, including Hamas and Hezbollah. The report confirmed that children in Gaza and Judea and Samaria have been recruited by Islamic Jihad, Hamas and other terrorist groups.

The UN also warned that in Lebanon similar recruitment of children is carried out by Hezbollah, a Palestinian terrorist group called Ansarullah and other terrorist groups. The common denominator of these terrorist organizations is that they act against the State of Israel, most of them openly.

Hamas, among other things, recruits children in the Gaza Strip for its demonstrations on the border during which they are required to throw stones and serve as human shields, an activity officially condemned by the United Nations.

Israel’s ambassador to the United Nations Danny Danon said that “a young generation continues to grow up on violent incitement against the state of Israel under the auspices of terrorist organizations.”

“This is an important step for the United Nations but in order to significantly damper terrorist activity, the Security Council must first recognize Hamas and Hezbollah as terrorist organizations and impose immediate sanctions on them.”

How can peace ever be achieved when one side incites and indoctrinates their children from birth, on TV, in their mosque, in school, at home, in their politics and social media?…HOW???

Gaza mother prepares her children before they protest against Israel – Screenshot

How many decades must pass
for the pure hatred of Jews
leaves their psyche
and their hearts?