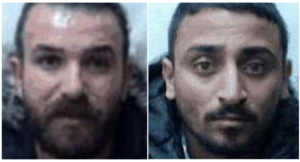 Released for publication: Israel’s Shin Bet security agency says it foiled the plans of an Iranian and Hezbollah run Palestinian terror cell, working under the guise of a PA humanitarian aid agency, to kidnap an IDF soldier in order to force the release of jailed Palestinian terrorists.

Israel has uncovered an Iranian-backed terror cell operating under the guise of a humanitarian aid agency in the Palestinian Authority-run West Bank, officials from the Shin Bet security service said Tuesday.

The discovery of the cell by the Shin Bet and IDF prevented terror attacks planned for the West Bank, the officials said.

A 23-year-old Palestinian detainee from the Jenin area, who was a known operative of the Popular Front for the Liberation of Palestine (PFLP), told Israeli interrogators that the attacks planned by the cell included the abduction of an IDF soldier who would be used to negotiate the release of Palestinians jailed in Israel.

Yazan Abu Salah,, who was arrested in April, said that he had been purchasing weapons and recruiting people in advance of terror attacks. He said two terror squads, one in the Ramallah area and the other in the northern West Bank, were preparing to act.

He also said his actions were motivated by a terror attack last year outside the settlement of Dolev that resulted in the death of 17-year-old Rina Shnerb. The pipe bomb attack was carried out by terrorists affiliated with the PFLP.

Abu Salah said that Iran and the Lebanese-based Hezbollah terror group were funding the cell, which intended to send its members to Lebanon for weapons training and instruction in operating drones.

The Shin Bet also arrested Abu Salah’s cousin Mohammed Abu Salah, a resident of Bir Zeit near Ramallah, who said the terror cell was working with elements in Iran, Lebanon and Syria.

The cousin also told interrogators that he was receiving orders from Assad Al-Alami, the head of an Iranian-backed militia that has been operating in Syria.

In total, 10 people were detained by Israel in connection with the terror cell.
Shin Bet officials say their investigation has revealed close cooperation between the PFLP operatives in the West Bank and Hezbollah and the Iranian regime and their combined efforts to carry out terror attacks against Israeli targets.