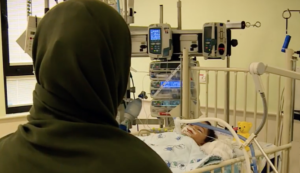 After being bombed and attacked by both the Turkish Army and its allied Free Syrian Army Forces in Afrin last year, Aram (name changed for security reasons) and her family – Kurds who were native to northern Syria – were forced to flee to Iraqi Kurdistan, much like the hundreds of thousands of Syrians who have recently become refugees due to the Turkish military operation.

When Aram arrived in Iraqi Kurdistan, her 3.5-year-old son, Ajwan, required open heart surgery that was unavailable in Kurdistan, but an American doctor working in Kurdistan told her that Ajwan could be treated in Israel.

“I was not afraid to come to Israel, even though I was warned I could lose my Syrian passport,” Aram told The Jerusalem Post.

Within a short time, Ajwan was connected to the Jerusalem-based Christian Zionist NGO Shevet Achim, which arranged visas for Aram and Ajwan and heart surgery for Ajwan at Sheba Medical Center in Tel Hashomer.

The goal of Shevet Achim is to help non-Israeli children receive life-saving medical care in the Jewish state. Efforts are continuing despite recent escalations, the NGO’s head Jonathan Miles explained to the Post. In the last 10 months, they have arranged treatment at Sheba and visas for 41 Iraqi Kurdish children, as well as three from Syria. Despite recent escalations, efforts are continuing. Two new patients are slated to arrive from the war-torn areas on Sunday, according to Miles, though he could not disclose further details.

The program is specifically focused on heart surgeries for children.

“For a Kurdish child to come here, his visa has to cross the desk of the interior minister, who limits entry to those who need life-saving medical care,” Miles said, noting that the families fly through Jordan to Israel.

He said that with as many as 200,000 to 300,000 Kurds who have sought – or are seeking – refuge in northern Iraq, he assumes another 20 to 30 children with congenital heart diseases will need to be treated, and Israel will “have an opportunity to reach out a hand in this way.”

Most of the surgeries are handled by Dr. David Mishali, head of the International Congenital Heart Center with Sheba’s Safra Children’s Hospital. He told the Post that without these surgeries, the children would either die or face a lifetime of debilitation.

“In many cases, when we read the children’s medical file from his country of origin, it can differ from what we discover with our advanced check-ups,” Mishali explained. “That is because in many Third World countries, medical technology is nearly 60 years behind from developed Western countries, like Israel.”

Similarly, Mishali said that he has to consider carefully which specific type of surgery to perform because patients are being sent back to a country where there is little, if any, primary care.

The surgeon explained that he reads the news and knows his newest patients will be coming to him after experiencing extensive trauma. However, he said he is not focused on recent events in Syria or Iraq, or political policies in the region.

“I am taking care of the patients the same way I take care of my Israeli patients,” he said. “They are beautiful people – warm and authentic people. It is a pleasure to take care of them.”

The patients are supported by a multidisciplinary team, including social workers, nurses and other staff.

Aram explained that she and other Kurds are “not hostages in the hospital,” and that Sheba and Israel allows them out of the hospital under the oversight of Shevet Achim to see the country, including touring Jerusalem and Tel Aviv and praying on the Temple Mount.

“I am thankful for all of the help,” she said, “and especially the doctors at Sheba for saving my child.”