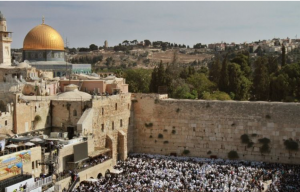 Deleting the text calling on Judaism’s Kotel (Western Wall) as “an integral part of al-Aksa Mosque/al-Haram al-Sharif” because of pressure from Russia, US and the NGO’s Director-General Irina Bokova, UNESCO went on to condemn Israel for ‘aggressive actions’ on the Temple Mount.

UNESCO’s executive board on Wednesday solely condemned Israeli aggression on the Temple Mount but swayed away from reclassifying the Western Wall as a Muslim holy site.

The vote in Paris was 26 in favor, six against and 15 abstentions. The US, Germany, United Kingdom, Estonia, the Netherlands, and Czech Republic voted against the resolution while a number of other European countries such as Albania, Austria, France, Spain, and Italy were among those that abstained.

An initial draft text had stated that UNESCO “affirms that the Buraq Plaza is an integral part of al-Aksa Mosque/al-Haram al-Sharif.”

Under pressure from the Europeans, the US and even Russia and UNESCO’s Director-General Irina Bokova, that line on the Western wall was pulled from the text at the last moment by the resolution’s authors – Egypt, Tunisia, Algeria, Morocco, Kuwait, and the United Arab Emirates.

Those six countries had submitted the six-page resolution to the 58-member board on behalf of the Palestinian Authority.

It solely accused Israel of aggressive actions in the al-Aksa Mosque compound and the Dome of the Rock, charging Jerusalem with igniting tensions on the ground.

The resolution stated that UNESCO “decries the continuous Israeli targeting of civilians including religious figures, sheikhs, and priests, further decries the large number of arrests and injuries among Muslim worshipers and Jordanian Wakf guards in al-Aksa Mosque/Al-Haram Al-Sharif by the Israeli forces and and also urges Israel, the occupying power, to end these aggressions and abuses which enflame the tension on the ground and in between faiths.”

`
The resolution referred to the area solely by its Arabic names and omitted any historical Jewish link to the area, which is Judaism holiest religious site.

The revised text put before the board on Wednesday took out any direct reference to east Jerusalem as the “occupied capital of Palestine” although it did speak frequently of Israel as an “occupying power” in Jerusalem’s Old City.

But the term Buraq Plaza remained elsewhere in the text, which did not mention the Jewish names of the Western or Wailing Wall for the area.

It’s the first time these Jewish terms have been left out of Palestinians resolutions at UNESCO with regard to the Temple Mount area.

The text also called on the board to affirm, for the first time, that the Mughrabi Gate, whose ramp is built over the women’s section of the Western Wall, “is an integral part of al-Aksa mosque/Al-Haram Al-Sharif.”

As did a similar resolution approved by the board in April, the resolution stated that the “Al-Haram Al-Ibrahimi/Tomb of the Patriarchs” and the Bilal Ibn Rabah mosque/Rachel’s Tomb” were an integral part of Palestine.