UNESCO has postponed a Jewish exhibit 2 years in the making, entitled “People, Book, Land – The 3,500 Year Relationship of the Jewish People and the Land of Israel,” after a last minute protest from the Arab League.

Less than a week before the planned opening of an exhibit chronicling 3,500 years of Jewish ties to the Land of Israel, the United Nations Educational, Scientific and Cultural Organization has postponed the event, slated to open at its Paris headquarters Monday, out of concern that it could be harmful to the peace process.

“UNESCO is deeply committed to the successful outcome of the peace process in order to achieve stability in the region and we have a responsibility in ensuring that current efforts in this regard are not endangered,” wrote director-general Irina Bokova on Wednesday to the exhibit’s cohost, the Los Angels-based Simon Wiesenthal Center.

The postponement, with no alternative date, is the latest in a series of skirmishes in which both Israelis and Palestinians have battled for narrative recognition at UNESCO.

Failure to open the exhibit as planned, warned the dean of the Wiesenthal Center, Rabbi Marvin Hier, would “confirm to the world that UNESCO is the official address of the Arab narrative in the Middle East.”

UNESCO and the center worked on the exhibit, “People, Book, Land: The 3,500-year relationship of the Jewish People with the Holy Land,” for two years with the help of Hebrew University of Jerusalem Prof. Robert Wistrich, who designed its panels.

Each panel, Wistrich said, had been approved by UNESCO. From the biblical forefather Abraham to the State of Israel’s status as “a start-up nation,” the exhibit was designed to highlight and affirm Jewish roots in the land, on which the Jewish people alternatively flourished and suffered throughout the generations. The exhibit at UNESCO headquarters in Paris just needed to be installed.

Initially, there was some disagreement as to the title, with the center wanting to use the phrase Land of Israel instead of UNESCO’s preferred term Holy Land. Wistrich said that throughout their history, Jews have spoken of Eretz Yisrael, or Land of Israel, whereas Holy Land is more of a Christian reference.

The center sent out invitations earlier this month using the phrase “Land of Israel.” By Monday, both sides had agreed to the term Holy Land, and UNESCO sent out its invitations.

A day later, UNESCO received a letter from the 22 countries in its Arab Group. They were concerned that while the exhibit’s title was innocuous, the subject itself was political, and warned that hosting such an exhibit in the midst of efforts by US Secretary of State John Kerry to reach a final-status agreement for a two-state solution undermined his work, as well as UNESCO’s objectivity.

The same day, UNESCO decided to postpone the exhibit even though it had met earlier with the Wiesenthal staff in Paris to go over the final details. The exhibit was already being set up in its halls, and it already had received a congratulatory opening letter from President Shimon Peres.

In a letter, Hier immediately called on Bokova to reconsider and not cave in to the “bullying” of the Arab Group, particularly given that UNESCO experts had already vetted and approved the exhibit. He recalled how he had obtained her verbal approval in October 2011, on the same day that UNESCO member states voted to recognize “Palestine” as a state and accord it full membership rights.

That approval, he wrote, was followed by a public signing ceremony in 2012 at the Museum of Tolerance in Los Angeles. Hier provided The Jerusalem Post with a photograph from that event, which showed Bokova standing by a panel for the exhibit. 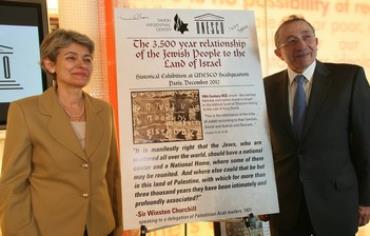 “Let’s be clear,” Hier wrote in his letter to Bokova, “the Arab Group’s protest is not over any particular content in the exhibition, but rather the very idea of it – that the Jewish people did not come to the Holy Land only after the Nazi Holocaust, but trace their historical and cultural roots in that land for three-anda- half millennia. If anything will derail hopes for peace and reconciliation among the people of the Middle East, it will be by surrendering to the forces of extremism and torpedoing the opening of this exhibition – jointly vetted and co-organized by UNESCO and the Simon Wiesenthal Center.”

Bokova, in turn, said UNESCO successfully works with many Jewish groups, and just this November held an event with B’nai B’rith about the Yiddish language. But, she said, consensus was important to the organization.

“Having in mind the delicate phase that the peace negotiations are entering, I have no choice but to take seriously the concerns raised in the letter of the chairperson of the Arab Group,” she wrote.

Israel, which is sponsoring the exhibit along with Canada and Montenegro, expressed dissatisfaction.

“We regret that such an important exhibition has been undermined by inappropriate considerations,” said Foreign Ministry spokesman Yigal Palmor, “and we hope a solution can be found to enable UNESCO to hold the exhibit as originally planned.”

Canada had no response as of press time.

If the exhibit does not open on January 20, the Wiesenthal Center plans to hold press conferences in Paris and Los Angeles to show it to the media.

UNESCO spokeswoman Sue Williams said her organization was “committed to working with the Wiesenthal Center on the exhibit and to find a proper time for its launch.”