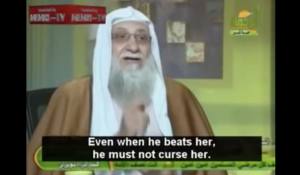 At a UN Human Rights Council debate earlier this month, the director of UN Watch, Hillel Neuer, challenged a new report blaming Israel for when Palestinian husbands beat their wives.

“Is it right to continue infantilizing Palestinians, such that when a man in Ramallah beats his wife, we encourage him to say ‘Israel made me do it’?” Neuer asked the report’s author, Dubravka Šimonovic, the United Nations Special Rapporteur on Violence against Women.

Neuer further noted that while Israeli counter-terrorism measure might put pressure on the Palestinian population, that doesn’t explain why violence against women is equally prevalent in the neighboring countries of Lebanon, Syria, Jordan and Egypt.

Nor was there any excuse for Šimonovic’s lack of actual evidence to support her conclusion.

But, most notably, Neuer wondered how the report could draw a dubious link between Israeli security and Palestinian spousal abuse, while ignoring entirely the regular weekly sermons by Palestinian Muslim clerics encouraging such domestic violence.

Neuer clearly hit a nerve, because the chair of the debate, UNHRC Vice-President Amr Ahmed Ramadan, broke with protocol by refusing to thank the speaker, stating instead:

“I would like to say thank you, but I can’t—because I think that you need to respect this Council more in the next days.”