Unmistakable proof that anti-Semitism has come to Congress 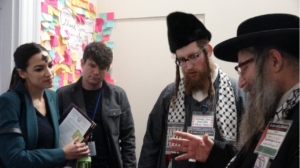 “Neturei Karta allies itself exclusively with the world’s leading anti-Semites. From Louis Farrakhan to Mahmoud Ahmadinejad, from Yasser Arafat to the heads of Hezbollah,” and now with Rep. Alexandria Ocasio-Cortez.

The Coalition for Jewish Values (CJV), representing over 1000 traditional rabbis in matters of public policy, on Monday thanked the Neturei Karta organization for providing “unmistakable proof that anti-Semitism has come to Congress.”

Last week, members of the anti-Israel group went to Washington to visit the offices of freshmen Representatives Alexandria Ocasio-Cortez, Ilhan Omar and Rashida Tlaib. Of the three, only Ocasio-Cortez met with the group — Omar explicitly refused to meet with them, while Tlaib claimed they entered and took photos in her office, undisturbed by her staff, while she was in a committee meeting.

“Neturei Karta allies itself exclusively with the world’s leading anti-Semites,” said Rabbi Steven Pruzansky, Eastern Regional Vice President of the CJV. “From Louis Farrakhan to Mahmoud Ahmadinejad, from Yasser Arafat to the heads of Hezbollah, if you are stirring the pot of Jew-hatred, the self-haters of Neturei Karta are anxious to add a ‘Jewish’ flavor to the odious broth.

Rep. Omar was smart enough to deny them entry, while Rep. Tlaib improbably claimed that none of her staff objected while they took a group photo in her office. Only Ocasio-Cortez was foolish enough to meet with them outright.”

The Neturei Karta began as an extremist anti-Zionist movement in Israel in the 1930s, but rapidly descended into a fringe group anxious to offer a fig leaf to anti-Semites. In a confrontation at a New York City Council Meeting in 2016, Councilman David Greenfield told Neturei Karta leader Rabbi Yisroel David Weiss that “you represent two dozen mentally-unstable individuals, that’s all, and you are the leader of this mentally unstable cult” and wished him a speedy recovery. Rabbi Weiss offered no response to this charge.

“Sadly, that recovery has not yet happened,” added Rabbi Pruzansky. “But in the meantime, Neturei Karta attracts attention by sitting down with purveyors of hate. This is unmistakable proof that Reps. Ocasio-Cortez, Omar and Tlaib have brought anti-Semitism — disguised, of course, as mere ‘opposition to Israeli government policies’ — to the halls of Congress.”

The Coalition for Jewish Values (CJV), the largest rabbinic public policy organization in America, articulates and advocates for public policy positions based upon traditional Jewish thought.