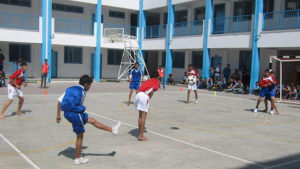 At failed emergency donors’ meeting in Rome to replenish the $364m. the U.S. is holding back due to Palestinian entrenchment in refusing to negotiate a peace deal with Israel, it was announced that services to Palestinian refugees may halt this summer since 70 yr-old refugee problem lacks it’s annual budget of $1.2 Billion.

UNRWA called on the United States to help avert a summer shutdown after pledges at a donors’ meeting in Rome on Thursday for humanitarian assistance to Palestinian refugees fell short.

Some $100 million in pledges for 2018 were received from the dozens of countries that gathered for the morning conference to help fix a $446m. funding shortfall in the budget of the United Nations Relief and Works Agency.

The crisis – billed as the worst in the agency’s 70-year history – was caused in large part by the Trump administration’s decision not to renew its annual pledge of $364m.

To date it has given UNRWA only $60m. for 2018, with US President Donald Trump threatening to not provide further funding until the Palestinians agree to negotiate with Israel.

The US has also said that other countries should pick up their “fair share” of the tab for the organization’s $1.2 billion budget.

“Without a collective solution, UNRWA will soon run out of money,” UN Secretary-General Antonio Guterres told reporters at the end of the closed door emergency conference co-chaired by Jordan, Sweden and Egypt.

Initially UNRWA had feared that 2018 funds would dry up in May, thereby forcing a halt in services to 3.5 million Palestinians in Gaza, the West Bank, Syria, Lebanon and Jordan.

UNRWA Commissioner General Pierre Krähenbühl said that it was now likely that services could be provided into the summer, but added that the agency still had to evaluate the impact of the pledges it had received that morning.

One reporter asked Krähenbühl, “Are you disappointed by the failure of many countries not to offer more funds?”

Krähenbühl said, “This is a continuous effort, today was a start,” adding, “We hope the US will come up with more money.

In principle, he said, it was correct that the US should not pay such a disproportionate part of the budget, but it should pull back on funding only after other countries had stepped up to the plate.

“We all agree on burden sharing, but to get there we need to make sure the transition does not victimize the Palestinian refugees more than they have already been victimized,” Krähenbühl said. “We cannot have an abrupt disruption of services.”

The EU, which last year donated €143m. to UNRWA, was represented at the conference by its foreign policy chief Federica Mogherini.

According to initial reports, she didn’t announced any additional pledges at the Rome conference. The EU did, however, make €82 million of its pledged funds for 2018 immediately available to UNRWA.

“The EU is doing its part, as always. We call on others to do the same,” Mogherini said as she urged the US to increase its UNRWA funding.

Screen Shot UNRWA figures for Palestinian refugees 2013, with even smaller amount of actual refugees in 2018, although “Registered Refugees” only broaden.

“The challenges that we are facing are unprecedented and require exceptional efforts and sympathy,” Hamdallah told the donors. “Your financial commitments will send a message of hope to millions of refugees, who are members of our people.

Adam Rasgon contributed to this report.