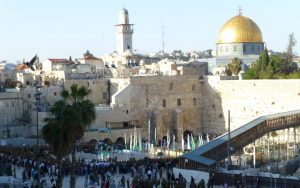 The Western Wall is part of Israel and the U.S. Embassy should be moved from Tel Aviv to Jerusalem, U.S. Ambassador to the United Nations Nikki Haley said Tuesday in an interview with CBN News, ahead of President Donald Trump’s visit to Israel next week.

Earlier Tuesday, national security adviser H.R. McMaster said that while in Jerusalem, Trump will visit the Western Wall, as well as the Church of the Holy Sepulcher, considered by Christians to be the site of Jesus’ tomb.

The announcement of Trump’s visit to the Jewish holy site came amid reports that a U.S. diplomat preparing Trump’s visit questioned Israel’s claim to the holiest site in Judaism, reportedly telling Israeli officials that the site is “not your territory.”

“I don’t know what the policy of the administration is, but I believe the Western Wall is part of Israel and I think that is how we’ve always seen it and that’s how we should pursue it.

“I’m not real sure what happened with that issue, but I know they’re trying to fix that. … We’ve always thought the Western Wall was part of Israel.”

However, according to McMaster, “No Israeli leaders will join President Trump to the Western Wall. He’s going to the Western Wall mainly in connection with the theme: to connect with three of the world’s great religions and to pay homage at each of these religious sites that he’s visiting. But also to highlight the theme that we all have to be united against what are really the enemies of all civilized people.”

Asked directly whether the Western Wall was part of Israel, McMaster told reporters: “It sounds like a policy decision.”

Trump will deliver his keynote speech to the Israeli public from the Israel Museum in Jerusalem, not Masada as originally planned.

The president is expected to arrive in Israel on May 22. He will meet with President Reuven Rivlin and then visit the Yad Vashem Holocaust Memorial. Later in the day, he will speak to Israeli citizens from the Israel Museum.

Trump will then meet with Prime Minister Benjamin Netanyahu and later dine privately with the prime minister and his wife, Sara.

On May 23, Trump will travel to Ramallah to meet with Palestinian Authority President Mahmoud Abbas, and will then visit the Western Wall and the Church of the Holy Sepulcher.