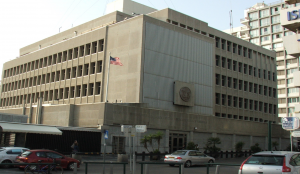 “The delegation is in Jerusalem to learn first hand what it will mean to move the US Embassy from Tel Aviv to Jerusalem,” said Ruth Lieberman, a friend of DeSantis and a political advisor in Israel.

“Its leadership intends to return to Congress with a report and a deeper understanding of what to expect, and of some of the decisions that have to be made as well,” Lieberman said.

DeSantis chairs the subcommittee for National Security for the US House Oversight Committee.

The delegation will meet with Prime Minister Benjamin Netanyahu and other Israeli political leaders during their visit.

US President Donald Trump had promised to relocate the embassy during his campaign for the White House. But since his January 20th inauguration, his lukewarm statements about the matter led many to speculate that he would not make good on his pledge.

Palestinian and Jordanian leaders have warned the US that moving the embassy could spark violence in Israel and the Palestinian territories, as well as in the Middle East region as a whole.

The “US Congress should understand that moving the US embassy to Jerusalem will explode the situation in the Mena region (Middle East and North Africa,” Fatah spokesperson Ziad Khalil Abu Zayyad said.

“This same team should consult with its military and political consultants in the (US) State Department that stated several times in the past that (such) actions put American interests and presence in the region in danger,” Abu Zayyad said.

“The new American administration must decide whether it is supporting the Israeli settlement building illegally on Palestinian lands or not and make a clear statement about this,” Zayyad added.