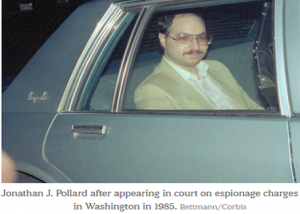 Israeli spy Jonathan Pollard’s strict parole conditions were set by the United States Parole Commission due in part to an interview he gave The Jerusalem Post nearly 30 years ago, documents submitted this week revealed.

That interview Pollard gave on November 20, 1986, to Post correspondent Wolf Blitzer was claimed at the time of sentencing to be in violation of a plea agreement he had signed – even though Pollard was in federal custody at the time of the interviews, which could only have taken place with the government’s permission, according to Pollard’s lawyer Eliot Lauer.

Now, 30 years later, Pollard is appealing the strict conditions for his parole which the parole commission imposed, based on that same interview. Those conditions prevent him from leaving his New York home after 7 p.m. or before 7 a.m., force him to submit any computer he uses for inspection, and requires him to wear a GPS monitoring device that forces him to violate the Sabbath.

In his appeal which was obtained by the Post, Lauer revealed information from documents submitted to the court by the parole commission, which attempted to explain why the special conditions were required for Pollard.

The commission cited Pollard having sent “at least 14 letters that contained classified information” from prison,” a charge Lauer firmly denied.

The commission also noted the interview Pollard gave to Blitzer, who later joined CNN. In his appeal submitted this week against the decision by US District Judge Katherine Forrest’s in August to keep in place Pollard’s parole conditions, Lauer wrote that “the commission also claimed that Pollard has ‘a propensity to violate the terms of his plea agreement and/or an order of the sentencing court,’ based on Pollard’s alleged violation in 1986 of a gag order issued prior to his sentencing, when Pollard, while incarcerated, was interviewed by journalist Wolf Blitzer, who was admitted to the prison by federal authorities,” the document said.

Lauer wrote in response that the commission misconstrued events from 30 years ago in an attempt to establish that Pollard’s “history and characteristics” justify the parole conditions. He wrote that the interview had no bearing on Pollard’s current propensity to violate the law, and does not provide any factual basis for the conditions.

“Even if, as the district court stated, the commission is ‘entitled to rely on sources that predate a parolee’s incarceration,’ that does not convert a single unproven instance of a violation of a gag order 30 years ago into an alleged ‘propensity’ to violate parole today,” Lauer wrote “Such reasoning also ignores the reformative effect of serving 30 years in prison as a model prisoner.”

Lauer added that the parole commission had failed to mention that Pollard was in federal custody at the time of the interviews, which could only have taken place because the government permitted them.

The documents indicating that the parole commission asked for special conditions for Pollard was not the first time the US government admitted that he was singled out due to the interview he gave the Post. In December 2012, a declassified 1987 CIA damage assessment of the Pollard case showed the CIA noting that Pollard had received a life sentence because he violated a plea agreement he had signed, by giving the interview.

Judge Aubrey Robinson sentenced Pollard to life in prison in March 1987, despite a plea agreement in which Pollard agreed to cooperate with the investigation against him, in return for a promise that he would not receive such a sentence.

The CIA document surmised that Robinson delivered the sentence because of the plea bargain violation, along with his perception of the severity of the espionage offense.

“Pollard’s willingness to grant an interview to journalist Wolf Blitzer for The Jerusalem Postwithout obtaining advance approval of the resulting text from the Justice Department violated the terms of his plea bargain,” the document said. “In the Blitzer interview, which was held at Petersberg Federal Penitentiary, Pollard provided extensive information on his motives and objectives in conducting espionage for Israel. He also provided Blitzer a general account with important examples of intelligence he passed to the Israelis, and emphasized that the Israeli government must have been aware of and approved of his activities.”

The interview was first published over several months in The Jerusalem Post, and was then reprinted in The Washington Post and The New York Times. The CIA speculated in the damage assessment that by giving the interview, Pollard was trying to mobilize support among American Jews and the Israeli government, but that strategy backfired.

Pollard’s wife, Esther, has said that neither Robinson nor the government had barred her husband from talking to the press. She said that if he wanted to meet with a reporter, all he had to do was obtain written permission from the Bureau of Prisons and restrict his comments to guidelines established for such interviews, which she said he did with Blitzer.

“The government did something highly suspicious by forgetting to send anyone to monitor these interviews,” Esther Pollard said. “Later, at sentencing, the prosecutor successfully inflamed the judge against Jonathan by falsely claiming that not only had the interviews been secretly arranged behind their backs, but that Jonathan had also disclosed highly classified material to Blitzer that compromised the intelligence community’s sources and methods.”

Esther Pollard pointed out that several years later, Blitzer said it appeared to him that the approval for the interview was “part of a calculated scheme” by the prosecutors designed to justify their planned violation of the plea agreement. She said government prosecutor Joseph diGenova later confirmed this by telling The Village Voice that he had hoped the interview would be the “rope” with which Pollard would hang himself.

Lauer and attorney Jacques Semmelman responded that the government’s claim that Pollard gave an unauthorized interview is baseless.