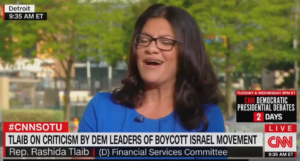 In her comments, Tlaib dismissed the notion that BDS is anti-Semitic, saying, “People want to dismiss it because they say it’s anti-Semitism. That’s the way they’re trying to discredit the fact that we all know that under Netanyahu’s regime, that human rights violations have gotten worse.”

Tlaib denounced the Israeli government’s alleged “racist policies” and mistreatment of Palestinian Arabs, but when pressed by Tapper if she would rebuke oppressive governments in the Middle East, such as in Saudi Arabia and Egypt, Tlaib doubled down on her attack on Israel.

“I think if there was an economic boycott movement around Saudi Arabia, I’ll be the first to sign up for it,” she asserted. “Right now there is not a bill or resolution on the floor that is saying stop boycotting Egypt.”

The remarks are the latest in a series of controversial remarks on Israel made by Tlaib.

Just last week, she compared the BDS movement to the American boycott of Nazi Germany.

“The right to boycott is deeply rooted in the fabric of our country,” she said. “What was the Boston Tea Party but a boycott? Where would we be now without the boycott led by the civil rights activists in the 1950s and 60s like the Montgomery bus boycott and the United Farm Workers Grape boycott?”

She then pivoted to the history of Americans boycotting foreign government, saying, “Americans boycotted Nazi Germany in response to dehumanization, imprisonment, and genocide of Jewish people.”

Tlaib claimed in an interview in May that Palestinian Arabs living in the British Mandate prior to the establishment of the State of Israel “provided” a safe haven to Jews after the Holocaust.

Many Republicans condemned Tlaib’s remarks, including President Donald Trump who accused her of anti-Semitism.

Louis Farrakhan supporter and Sharia law advocate Linda Sarsour (2nd from Right) stands with fellow anti-Semite Rashida Tlaib (2nd from Let) holding a map where they have replaced the State of Israel with Palestine.

In addition, when asked in a past television interview whether she would vote against military aid to Israel when she goes to Congress, Tlaib replied “absolutely.”

Tlaib and Ilhan Omar, another Muslim congresswoman who has caused uproars with anti-Israel remarks, are planning a visit to Israel in several weeks.

Israel’s Ambassador to Washington Ron Dermer said earlier this month that Israel will allow the two congresswomen to enter the country “out of respect for the US Congress and the great alliance between Israel and America.”