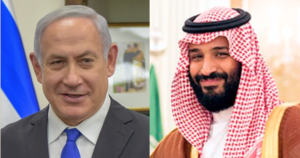 Senior Arab diplomatic sources on Thursday night said intensive talks were taking place between Washington, Jerusalem, Cairo and Riyadh to convene a summit in the Egyptian capital, which will include a meeting between Prime Minister Benjamin Netanyahu and Saudi Crown Prince Mohammad Bin Salman.

Senior Arab officials told Israel Hayom, meanwhile, that US Secretary of State Mike Pompeo and his team have been mediating between Israel and Saudi Arabia on the matter for the past several months.

Some Arab Quartet states stopped their donations in mid-2016 in order to pressure PA President Mahmoud Abbas to initiate political reforms that will lead to peace with Israel. – IsraelandStuff

One senior Arab diplomatic source, who confirmed the details to Israel Hayom, said, “In recent days there have been very intensive discussions between Washington, Israel, Egypt and Saudi Arabia to arrange a summit meeting in Cairo as early as the coming weeks, even before the election in Israel, which aside from the host, Egypt, will be attended by the US, Israel, Saudi Arabia and also the leaders of the United Arab Emirates, Sudan, Bahrain and Oman.”

Bahrain also proposed hosting the summit in the capital Manama, suggesting that Netanyahu meet the Saudi crown prince there.

According to other Arab sources, Jordan, too, received an invitation to the summit, if it indeed takes place, and that the Jordanians have engaged in talks with various Arab states to convey their position on the matter. According to a senior official, in Amman, Jordan’s King Abdullah wants Palestinian Authority President Mahmoud Abbas to receive a summit invitation. The Jordanians, for their part, have received messages from Washington that discussions with Ramallah on the matter were, in fact, taking place and that Israel has agreed in principle to the Palestinians’ participation.

A senior PA official confirmed those details to Israel Hayom, and said that for the time being “Abbas and the leadership in Ramallah would adhere to their boycott of Washington and to freezing diplomatic ties with Israel.” According to the official, Washington has told the PA that “this would likely be Abbas’ and the Palestinians’ last chance to climb down from the tree and partake in the diplomatic developments unfolding in the region.”

Meanwhile, another senior official in Ramallah confirmed to Israel Hayom that former Prime Minister Ehud Olmert is attempting to arrange a press conference with Abbas at the United Nations in New York next week to address the Trump administration’s vision for Middle East peace.

Olmert is expected to express his opposition to the plan, and remind observers that he was on the threshold of an agreement with the Palestinians at the end of his term as prime minister.

According to Palestinian sources, what Olmert intends to say could help Abbas in mobilizing broad international support to reject the Trump plan.

Abbas is scheduled to speak at the United Nations in New York next week and attend a UN Security Council meeting.

An official in Abbas’ office told Israel Hayom that Abbas still hadn’t decided whether to take part in the joint press conference. Olmert and Abbas last met in Paris around a year and a half ago.

While speaking to reporters outside the United Nations on Thursday, Kushner said, “It is almost pathetic that they are criticizing other people’s efforts to try and reach an agreement. It comes from a lot of jealousy that they couldn’t do it themselves.”

He continued: “If you really want to make peace, then you need to encourage the efforts of other people to try and make peace instead of trying to make headlines when you are not relevant and intervening in the situation to get attention.”

Olmert and Abbas are “publicly opposing the plan when they had the chance and failed, I see that as disrespectful,” he added.

Parts of this article were originally published by i24NEWS