From Musa Al-Nabhan: “We extend to you & the great leadership of the Israeli people our warmest congratulations & blessings in the democratic wedding witnessed by the State of Israel.”

Various Syrian rebel group leaders have sent congratulatory messages to newly re-elected Prime Minister Benjamin Netanyahu, according to an Israeli Druse who has acted as a go-between with Israel. 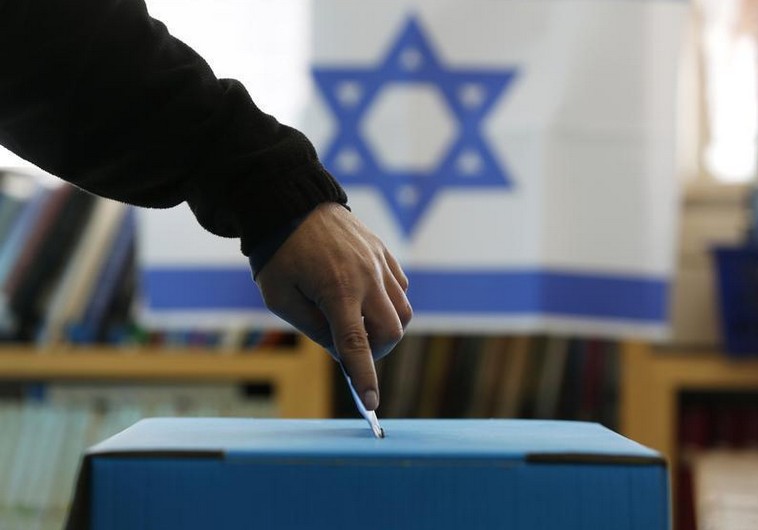 An Israeli flag is seen in the background as a man casts his ballot for the parliamentary election. – Photo: REUTERS

“We extend to you and the great leadership of the Israeli people our warmest congratulations and blessings in the democratic wedding witnessed by the State of Israel,” wrote one opposition political activist, Musa Al-Nabhan, in a letter sent to Mendi Safadi and shared with The Jerusalem Post.
Specifically, Nabhan addressed his congratulations to Netanyahu as well as newly elected Druse Likud MK Ayoub Kara, adding, “We hope that your government will continue to provide the necessary support to the Syrian people, which are fond of you and looking to build the best of relations on all levels.”Nabhan also thanked Kara and Safadi for their efforts.Safadi served as former deputy minister Ayoub Kara’s chief of staff and has independently met with members of the liberal and democratic Syrian opposition who oppose the Islamists and want friendly relations with Israel.

Safadi also met with Syrian rebel leaders last week and has previously met with them in Europe and has traveled in the region, met with activists, and relayed messages from them to the Prime Minister’s Office.

He was responsible for relaying the congratulatory letters from the Syrian opposition to then President-elect Reuven Rivlin.

Safadi told the Post that he had received two official letters and numerous other calls, including from officers in the western-backed Free Syrian Army.

Another letter from The Revolutionary Assembly for the Future of Syria, addressed Netanyahu, saying, “We received with great hope and joy the news of your victory…and hope that you will continue, along with advisor Mr. Mendi Safadi, to support the Syrian revolution.”

Safadi said that the rebels thanked Israel for its humanitarian support.

“If the West implemented a strategy with the Free Syrian Army in all parts of Syria similar to that which was implemented in aid and military support to the Kurds in Kobani, Islamic State and al-Qaida’s Nusra Front would be swiftly removed from the battlefield,” argued Safadi.

Regarding reports that Israel has treated Nusra Front fighters in its hospitals, Safadi says that these rumors originated from sources close to the Syrian regime, which is trying to defame Israel by linking it to the jihadists.

“Israel unequivocally does not come under any contact of any kind with the Nusra Front or any other Islamist group since it is clear to everyone that these are a source of danger for the security of the state,” he added.