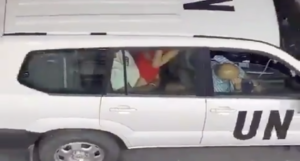 WATCH: Already plagued with sex offenses, nepotism, corruption and misappropriation of funds, the UN Chief is ‘disturbed’ and forced to launch yet another investigation, this time of UN employee being filmed having sex in official UN car driving through Israel.

The United Nations has launched an investigation footage surfaced showing two of the organization’s members having sex with a woman in an official UN vehicle in Tel Aviv.

The video, which began circulating on social media over the weekend, shows what appears to be a woman wearing a red dress straddling a man in the backseat of the vehicle.

#NewsAlert: Shocking video shows a United Nations vehicle that paid a hooker of a road to get sex in the back of the car, with a official @UN delegation member in the back! pic.twitter.com/0PoWZd20oG

According to Stephane Dujarric, the spokesperson for the UN Secretary-General António Guterres, the controversial video was captured in Tel Aviv’s HaYarkon Street, one of the busiest in the city.

The vehicle in which the act took place appears to belong to the United Nations Truce Supervision Organization, which has been on a peacekeeping mission to Israel since its establishment in 1948.

Dujarric called the 18-seconds video ‘“abhorrent and goes against everything we stand for.” Dujarric said he doesn’t know whether the sex act was done in exchange for any form of payment.

“We expect the [investigation] process to be concluded very quickly. The identification of the individuals in the video is close to being completed.”
The organization has come under fire in recent years for numerous sexual exploitation incidents allegedly conducted by its members.

Heather Barr, the acting co-director of the Women’s Rights Division at Human Rights Watch and former UN employee in Afghanistan and Burundi, said she is not at all surprised by the video.

“Good that they’re investigating it”, said Barr, but added that the UN “has a bigger problem than this one video.”

“That problem is about allegations of sexual exploitation and abuse committed by staff members of the UN,” Barr said.

In 2019, 175 allegations of sexual abuse were launched against UN staff members, 16 of which have since been prove, with 15 others still being investigated.