Video posted by newly-established terrorist group headed by members of  Fatah, Islamic Jihad, Hamas & PFLP says it will fight to recover ‘all of Palestine – from the sea to the river’.

Palestinians in the West Bank city of Hebron have distributed a video declaring the establishment of the “National Union Battalions,” which according to them will be jointly headed by members of Hamas, Fatah, Islamic Jihad and the Popular Front or the Liberation of Palestine as a means of consolidating the struggle against Israel. 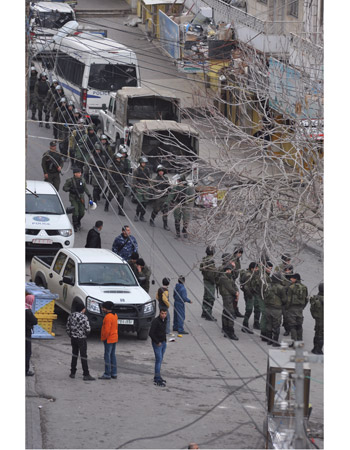 In its announcement, the group stressed that while it supports the UN’s recognition of Palestine as a non-member observer state, it will fight to recover “all of Palestine – from the sea to the river.”

The video message, which the Palestinians claim was taped on Friday, the group’s members say “This is the beginning of a third Palestinian intifada, which is erupting from the heart of Hebron and will spread to all of Palestine.”

In the clip, the group’s representatives directly threaten Israel, saying that if it continues to arrest Palestinians in the West Bank, they will kidnap soldiers.

They also said that “if Israel kills the Palestinian people,” they would kill Israelis and “strike Israel with an iron fist.”

Screenshot of the terrorist’s clip making demands. The group said its goals and demands include: The removal of all IDF checkpoints in the West Bank; the release of all Palestinian prisoners from Israeli jails; an Israeli withdrawal from “all Palestinian lands”; an end to the Israeli “assault” against the residents of Hebron; the transfer of all tax revenues Israel has been withholding from the Palestinian Authority since the UN vote on upgrading the Palestinians’ status; opening all border crossings and supplying electricity and water to the Gaza Strip.

On Friday Palestinian police officers clashed with Hamas supporters who held a rally in Hebron to mark the Islamist group’s 25th anniversary. The demonstrators marched from city hall toward an Israeli checkpoint to confront IDF forces.

Palestinian officers tried to clear them from the area, and in response the demonstrators threw stones at them. A number of protesters were detained.

The incident marked the first time since the recent wave of riots in Hebron began that Palestinian police intervened and prevented demonstrators from clashing with IDF forces in the city.