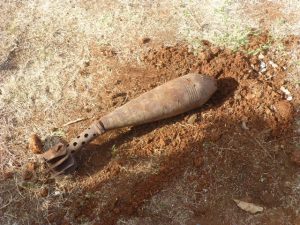 Israeli fighter jets struck targets inside Syria, including two tanks belonging to the Syrian government, on Saturday, in response to the firing of over ten projectiles into the Golan Heights.

The Israel Defense Forces reported that the projectiles landed in “an open area” causing no known injuries or damage and were believed to be spillover from the Syrian civil war.

Two hours after the projectiles landed, the IDF announced that “IAF [Israel Air Force] aircraft targeted the position from which the launches originated. Furthermore, the IAF targeted two tanks belonging to the Syrian regime in the Northern Syrian Golan Heights.”

The pan-Arab satellite channel Al-Mayadeen reported shortly afterwards that two people were killed inside Syria as a result of the Israeli counter-strike.

The channel also quoted Syrian army sources as claiming that the Israeli attack was coordinated with a strike by the jihadist al-Nusra front, one of the rebel groups fighting the government near the Golan Heights.

The Syrian state news agency quoted Syrian army officials as saying that a number of people had died as a result of the strike.

On Saturday evening, local time, Israeli Prime Minister Benjamin Netanyahu said “we are not prepared to receive drizzle or leakage of fire from any front. We will respond by force to every firing on our territory.”

Israel’s Defense Minister Avigdor Liberman said earlier on Saturday that Israel sees the government of President Bashar al-Assad as responsible for stray fire into the Golan.

“We will not stand idly by and allow as our sovereignty is violated or our security threatened, even if it is spillover from the fighting between the rebels and the Syrian regime,” he said in a statement.

“We react with force, determination and discretion to every such incident, just as the IDF did in the Golan Heights an hour ago. As far as we are concerned, the Assad regime is responsible for what is happening in its territory, and it will continue to bear the consequences if such events repeat themselves.”

Israel filed a protest with the United Nations Disengagement Observer Force that monitors the border, the IDF said.

The IDF released a further statement saying it had “instructed civilians to refrain from moving and gathering in open areas adjacent to the border area.”

Forces loyal to Syrian President Bashar al-Assad and Hezbollah have been clashing with rebels not far from the Golan Heights.

Since the start of the Syrian conflict, projectiles have exploded periodically inside Israeli territory, causing damage but no injuries.

While most were presumed to be stray shots, Israel has accused Syria of aiming at Israeli targets on several occasions, briefly returning fire.

The last incident came in April, after which the IDF said it struck targets inside Syria.