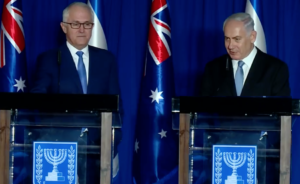 Watch Australian PM Malcolm Turnbull speak of the 100th anniversary of Battle for Be’ersheva, and the present day “common threats,” including Islamist terrorism that both Israel and Australia need to fight together.

Israeli Prime Minister Binyamin Netanyahu and Australian Prime Minister Malcolm Turnbull presided over the signing of a memorandum of understanding (MOU) on defense between the two nations Monday.

Prime Minister Turnbull is in Israel to participate in a ceremony marking the 100th anniversary of the Battle for Be’ersheva, which was liberated by British and Australian forces on October 31, 1917.

Netanyahu told his Australian counterpart that Israelis admired Australia because it has “taken part in virtually all the battles for freedom in the last 100 years.”

Turnbull and Netanyahu both spoke of their country’s shared values. Turnbull said that Israel and Australia faced “common threats,” including Islamist terrorism, and that the MOU was important for Australia as it adapts its defense spending towards the challenges of the 21st century.